So, You’re Getting Your First Mammogram… 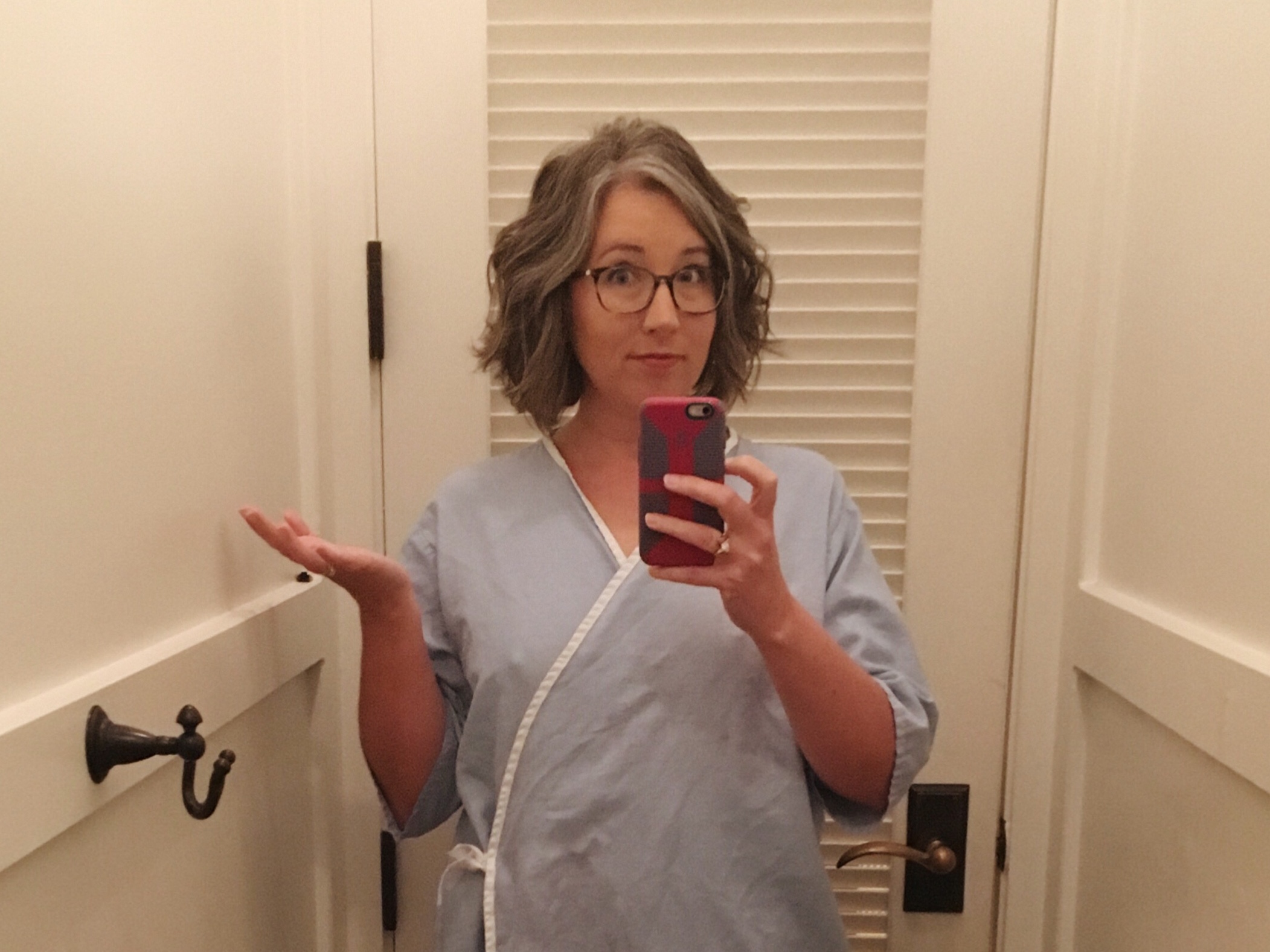 The time has come.  You’re turning 40.  Or your family history has you pegged as high risk.  Or maybe, God forbid, you have found a lump.  And the next thing you know, the imaging center is calling you to schedule your very first mammogram.

And you have no idea what to expect.

Neither did I when I went for my first one just this morning.  Will you allow me to shed a little light on the subject?  I promise, it’s not as bad as I had built it up in my head to be.

You’re maybe a little scared, a little anxious.  Maybe you’re petrified!  You know what?  That’s OK.  It is perfectly normal to feel any of those feelings.  You know what’s also normal?  Feeling completely nonchalant about the whole thing.  Feel your feelings, whatever they are.  And know you are not alone in any of them.

We all have some idea of what will happen in practicality, but we all have real life relationships that have been affected by breast cancer.  Personally, I have a cousin who was diagnosed with it when she was just about my age (thank God she’s just fine now!).  I’ve had aunts that have undergone treatment and come through the other side.  And I’ve had two friends die from this absolute monster of a disease.  Jaimie and Mary were the same age as me, both mothers and wives in their mid-thirties.  It was devastating.  So, while I knew there was little indication that I, myself, had anything to worry about, it didn’t stop the worry from coming.

So, embrace where you are emotionally, say a prayer, and breathe.  What’s going to be is going to be.  More likely than not, it will all be just fine.

I’ll admit that I was a bit nervous, albeit slightly intrigued, about the whole process.  I mean, we’ve all seen the funny memes and heard the jokes about “smashing the girls” or “squeezing the tatas” or whatever.  But how exactly was this all going to go down?

Basically, I was going to get to second base with some tech I had never laid eyes on before and this giant machine was going to flatten my already barely-existent breasts into pancakes.  Yeah?

It was going to be really awkward and hurt like crazy.  Right?

Let me walk you through my experience.

First, I walked in to what could easily have been a spa registration area.  Soft music, beachy color palette, citrus water in the fancy dispenser on a counter next to a selection of teas.  Big, comfy couches and chairs filled the room.  I was called back to do all of the legal stuff, driver’s license and insurance card and whatnot.  Then after a couple more minutes in the spa, I was led to a changing room.

Once again, it was spa-style with a seating area, lockers, and nice big dressing rooms.  I was handed my robe and they double checked that I hadn’t put on any deodorant that morning (metallic particles in some deodorants can show up in the scan and cause confusion).  Then they told me that Kristen, my tech, would be waiting outside for me when I was ready. 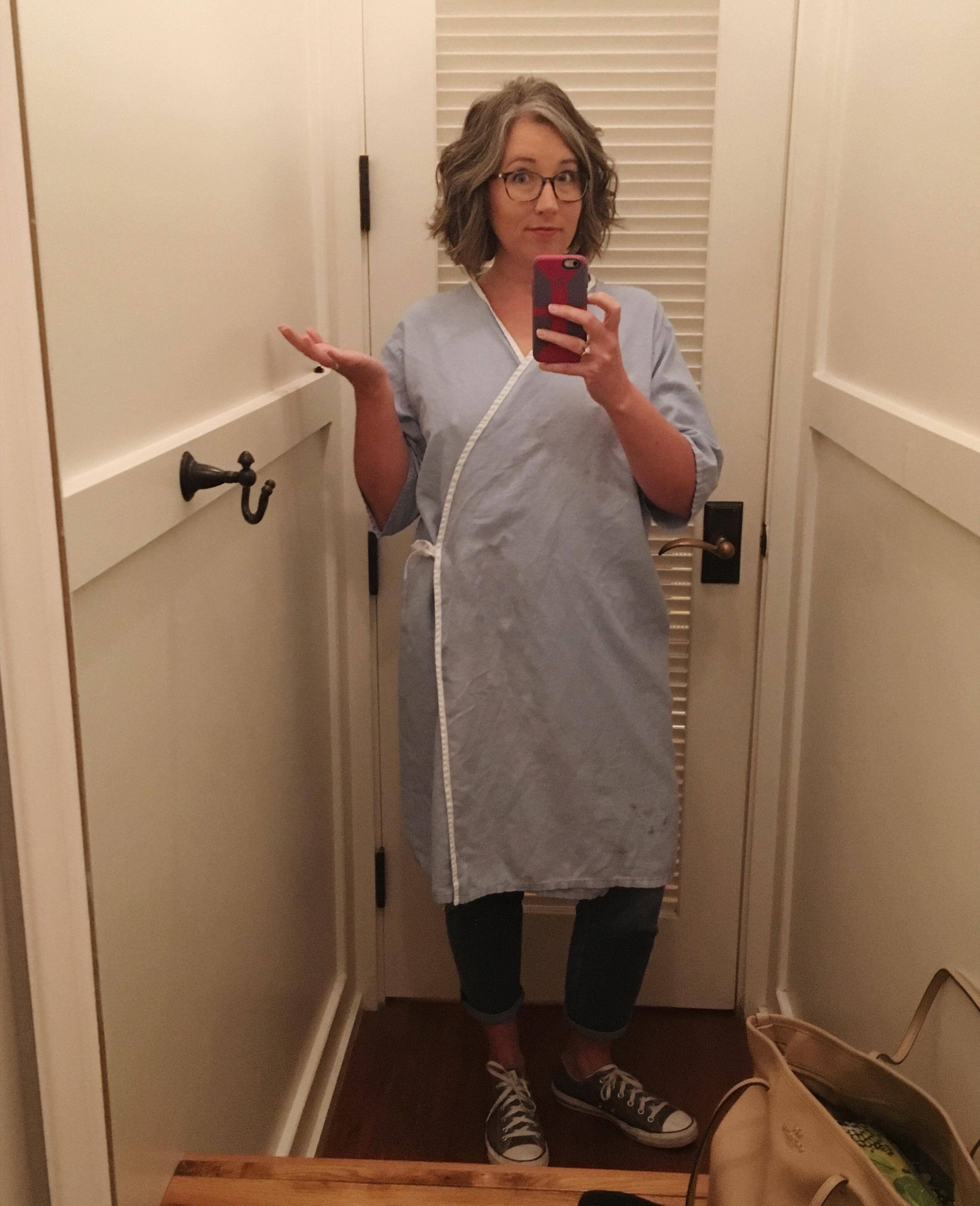 After I got all dressed up (I think the Chucks really make the outfit, don’t you?), Kristen led me to the scan room.  The machine wasn’t nearly as big or scary as I thought.  It was very open with a black tray of sorts on which to position the breast.  Kristen was so easy-going and so kind.  I never felt awkward or anything about having this stranger all up in my business.  It dawned on me that this girl must see hundreds of breasts a week.  She certainly wasn’t going to be embarrassed, so I shouldn’t be either.

With each scan (two per breast, a top view and a side view each), she would arrange my breast on the tray and tell me to position my feet and hips and shoulders so that the best view could be achieved.  It might mean feet and hips toward the machine or at an angle away.  Maybe raise your left shoulder and drop your right.  Then the machine would lower another plate down to flatten out the breast tissue.  There was a little tugging on Kristen’s part, but none of it was painful in the least.  Having nursed four babies, I was hardly phased at all, to be honest.  Once she got me into position, however, it was very important not to move or breathe.

And honestly, that was that!

Kristen reminded me that an initial mammogram is called a baseline.  Once they see the baseline scans, it is perfectly normal to be called back in for a second look, especially if you have dense breast tissue.  I expressed my confusion.  How could I possibly have dense breast tissue when I’ve nursed four babies, have a small cup size, and (sorry, TMI…) they basically disappear when I lay flat on my back?  She explained that breast density is basically due to a lack of fatty tissue in the breast.  She said I wasn’t particularly dense, but somewhere in the moderate range.

After that, I was led back to change and sent on my merry way.  In and out of the building in less than 30 minutes.

So, what are the key points to remember?

I sincerely hope that this has alleviated any concerns you have about the logistics of your first mammogram.  I’m proud of you for taking a big step in monitoring your health!!

breast cancermammogramwomanhood
Traveling as a Couple: Escaping Reality and Refocusing on YOU {part 3}
Friday Five, vol. 5

3 thoughts on “So, You’re Getting Your First Mammogram…”