The Beginning of Our Story 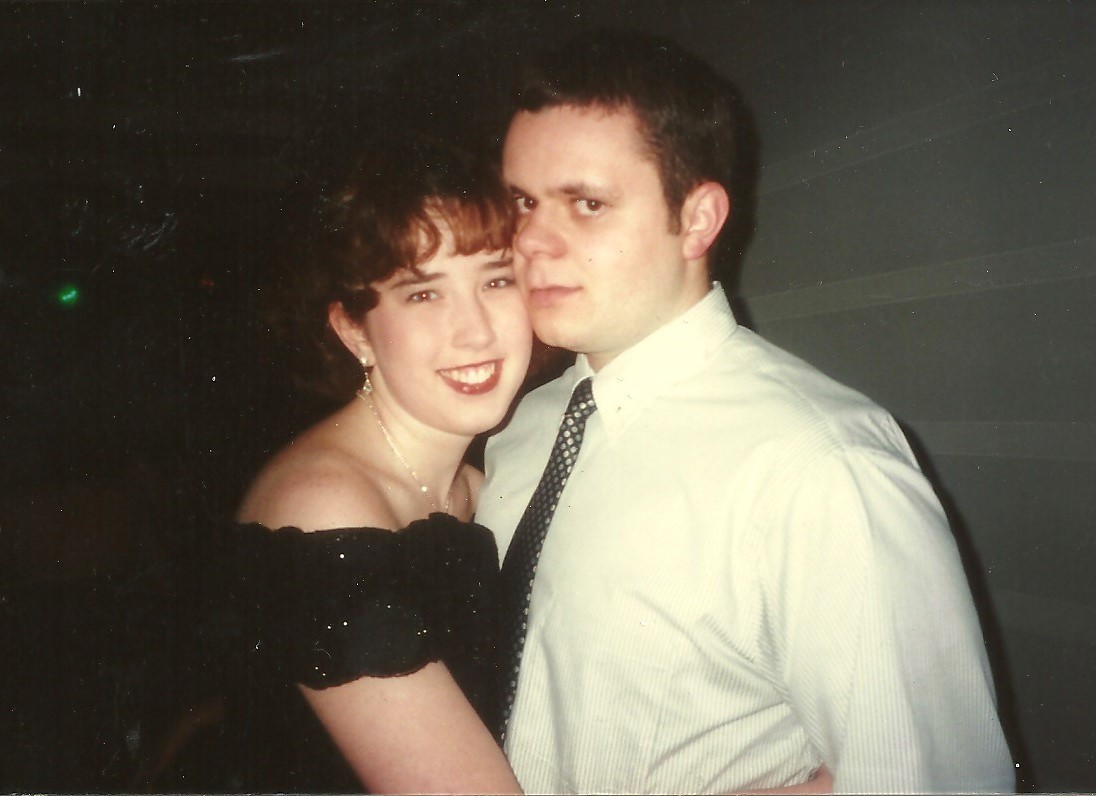 When I think of the absolutely crazy way Greg and I first met and how very wrong it all could have gone, two things happen.  First, I just have to laugh. Then, I thank God from the bottom of my heart that the plan He had for us worked out.

So, how did it all go down?  Let me tell ya a little story…

I went to an all-women’s college.  As in, we could actually concentrate on our studies and feel safe in our dorms and feel empowered and uninhibited by the presence of men and all that jazz.  It really was a wonderful atmosphere for me.  But it made the college experience of dating and whatnot a little trickier.

Well, there was an engineering college across town, Rose-Hulman Institute of Technology, that had historically been all-male and our schools had a long history of coming together for various activities.  Dances, theatrical stuff, some classes, etc.  But the real way we students got together was fraternity parties.

Every so often, usually on Tuesday nights, guys from the fraternities would come over to our dorm and (chaperoned by a female student during approved visiting hours, of course!) pass out fliers, inviting us to their next shindig.  It didn’t take my friends and me long to figure out which fraternities we liked best.  Several factors went into this, naturally.  Cute boys, good music, cute boys, good drinks, cute boys, good atmosphere…you get the idea.

Anyway, a couple of months into our freshman year, months of party-hopping with girlfriends and forays into all things “college”, my friend Alison had started dating this guy named Brian (whose nickname was “Bags” thanks to his very long last name that I never could pronounce correctly).  He was in one of our favorite fraternities.  The same fraternity, coincidentally, that a guy I was kinda sorta dating was in.

While I really liked Bags and the rest of the guys, I truly can’t tell you why I was even dating this particular fella other than he was the first “college boy” to ask me out.  It wasn’t serious.  It didn’t last long.  In fact, it had totally fizzled out after about a month and I was fed up with him.  None of my friends really liked him, either.  Alison and Bags had been trying to get me to meet this guy, a fraternity brother of his, called “Williby.”  He was funny and crazy smart and they thought the two of us would totally hit it off.  I wasn’t interested in the least.

So there we were, December 1995.  We had all just come back from Thanksgiving break.  For me, that meant heading straight into dress rehearsals for the Christmas show the music and theater departments put on.  Days were filled with classes, evenings were filled with rehearsals, nights were filled with homework, studying and whatever sleep we could cram in.

I remember this particular Wednesday like it was yesterday.  I woke up for my 8:00 am class at about 7:55 after having been up late the night before arguing on the phone with that fella I mentioned and studying.  Thankfully, I went to an all-women’s school, remember?  I threw on some sweatpants, a sweatshirt, and ran out the door.  I know for a fact I hadn’t showered and I couldn’t tell you with 100% sureness that I even brushed my teeth.  But hey!  Whatever!  It was fine.  I wasn’t going to see anybody I needed to impress!

(Do you notice that still no shower had been taken?  That I was still wearing whatever mismatched sweats I had put on that morning?  ‘Kay.)

Somewhere in that dinnertime hour, I ran into Alison.  She told me that I should swing by her room after I came home from rehearsal.  Bags was going to be over and they would be studying.  Wonderful!  See you then!

Rehearsal was arduous, as they usually are in the final stages before a show.  By the time it was over, I was exhausted and cranky and all worked up about something.  I don’t even remember now exactly what it was.  I just remember that it was very important at the time.

So, this was the mood I was in when I got back to my room.  I threw my things onto my bed in a huff and stormed down the hall to Alison’s room.  I didn’t care that Bags was there.  The two of them could listen to my rant and behold me in all of my unshowered and cranky glory.

When I got to her room, the door was cracked open, so I did the “simultaneous knock and walk in.”  What a surprise when I did, though!

Well, this handsome young man with the broad shoulders, barrel chest, and muscular legs (hello sweatshirt and shorts in December in Indiana!) stood up off the floor.  STOOD UP, I tell you!  He reached out his hand to shake mine and said, “Hi.  I’m Greg Williby.”

My mind raced.  Williby.  This was the guy!  This was the one they wanted to set me up with!  The one who was cute and smart and funny!  And apparently, who had impeccable boy scout manners!

And I left him hanging.

“Well, shit!” I said.  And then, I turned around and left the room. 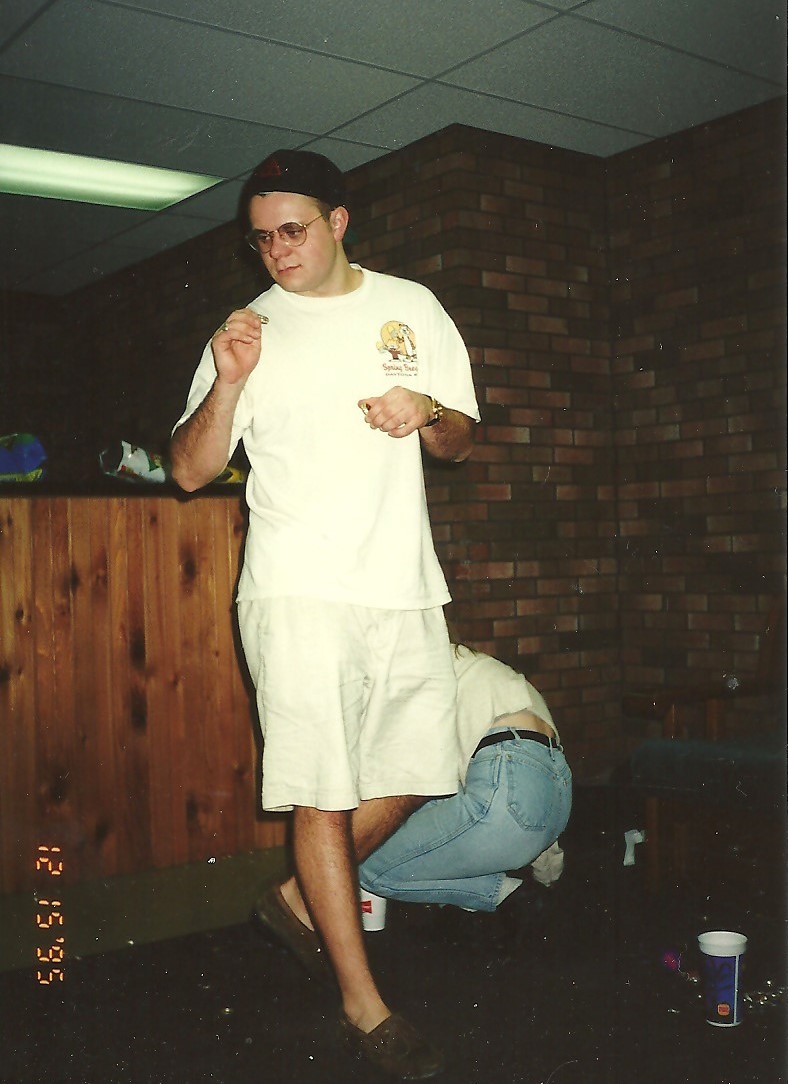 Here’s a picture of object of my rudeness.  When I met him, he was wearing his contacts instead of glasses and he didn’t have a hat on.  But khaki shorts and a backwards ball cap will forever be one of my favorite looks on him.

So, yes.  I was a real piece of work that night, wasn’t I?  But what had really stuck with me, other than my atrocious behavior, had been a spark.  A look in his eye.  The way he had actually stood up and shown me kindness and respect even though I had been such a mess.  I decided I really did want to meet this guy after all!

Thankfully, his fraternity was hosting a small Christmas party before everybody left for break.  I had a chance at redemption!  We girls got all dolled up, of course, and off we went.  And who was one of the first people I ran into at this little get-together?  That would be Greg Williby.  I went up to him, apologized for my bad behavior.  He laughed it off and said that he and a buddy were set to play a game of caps (yay for college drinking games, amiright?!), did I want to come with him and hang out and be his good luck charm?  I don’t think I could’ve said YES any faster.

That night, he won his game of caps.  He won my heart.  And the rest, as they say, is history.

And, really, how lucky am I?  I could’ve screwed the whole thing up.  But God knew better.  He led us every step of the way despite, well, despite me.  Just goes to show that if it’s meant to be, it’s meant to be.  And 21 years later?  I’d say we’re gonna make it.

Here we are at my school’s Spring Formal, March 1996, just one month after we “made it official.”  He’s been my boyfriend ever since.  Thank you, Jesus!

1 thought on “The Beginning of Our Story”