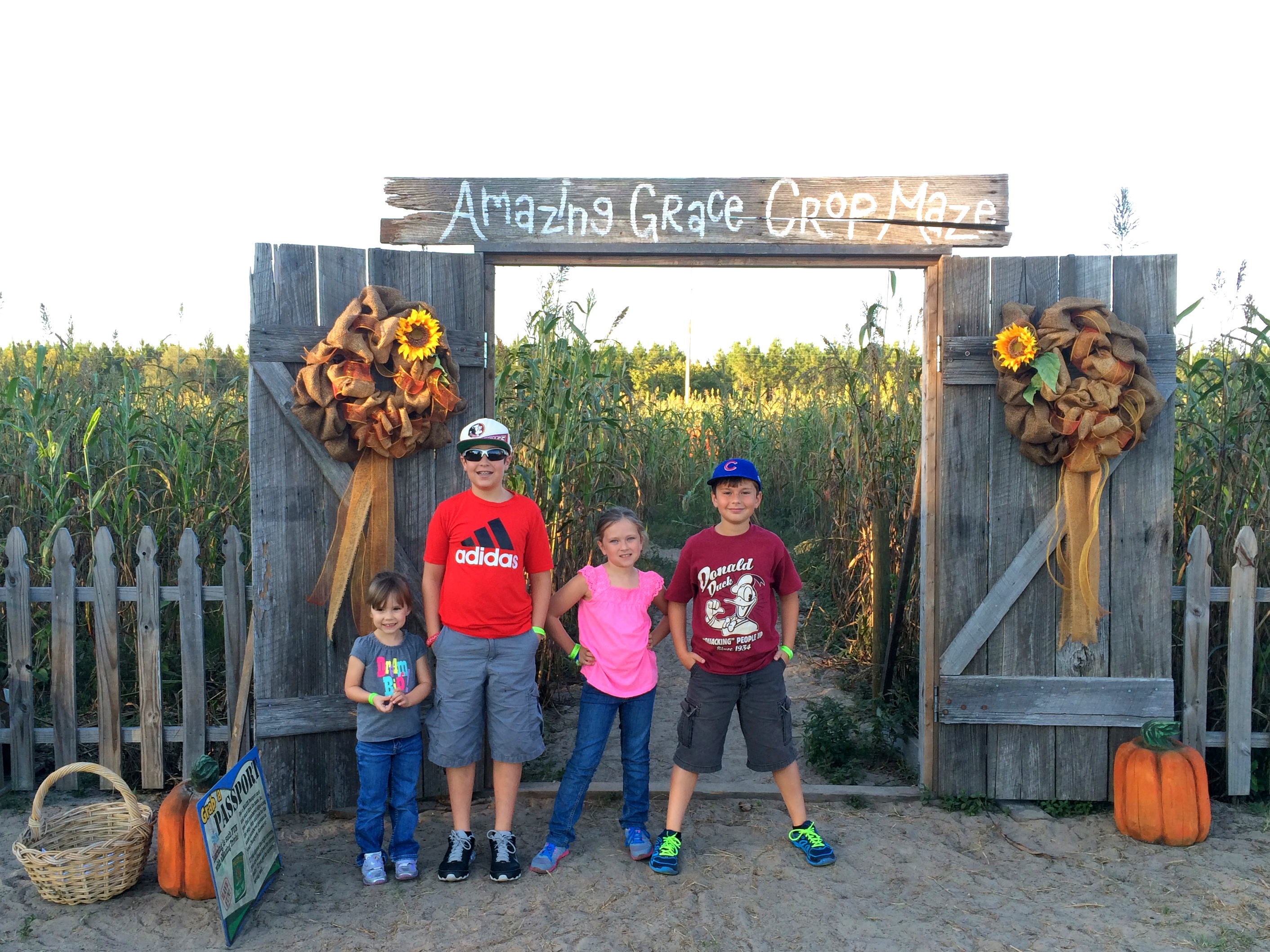 For everything there is a season, and a time for every purpose under heaven.

So it says in Ecclesiastes 3:1 and so it is with the annual family trek to the pumpkin patch.  I was struck with this realization the other day when Greg and I took our girls to the neighborhood Methodist church to get this year’s jack-o-lantern fodder.  As with so many other aspects of parenting, the years of shuffling through dust and hay of the local pumpkin patch won’t last forever.  Nay, I tell you.  They pass so quickly that you won’t even realize they are gone.  Until they’re gone.

Travel with me, will you?  Let’s take a little trip back in time and my family photos will illustrate what I mean.

Patching It Up in the First Years

Oh, how eager are the first time parents!  So eager, in fact, that they’ll drive 90 minutes from their apartment in northern Tucson to a farm in Wilcox, AZ just so their one year-old can cut a pumpkin from the vine.  You know, because he’ll remember that down the road.  Right?  No, these fall escapades are definitely more for the parents and the photo albums.  Adam doesn’t remember riding in the wheelbarrow with a pumpkin that weighed more than he did.  He doesn’t remember the heat of the Arizona sun or splitting a piece of cheesecake for the first time afterwards.  He won’t remember jumping from pallet to pallet at the new patch in Florida the following year.  Nor will he remember declaring each and every pumpkin there to be “just right for us.”  But we do.

We start these traditions with our children hoping that they stick.  Hoping that our own childhood memories can be reestablished and recreated in our own budding families.  We go out of our way to get just the right outfit, just the right day, just the right experience both for our children and our own sense of parenting the “right” way.  And we cross our fingers that the tradition not only sticks, but changes and grows along with our family. 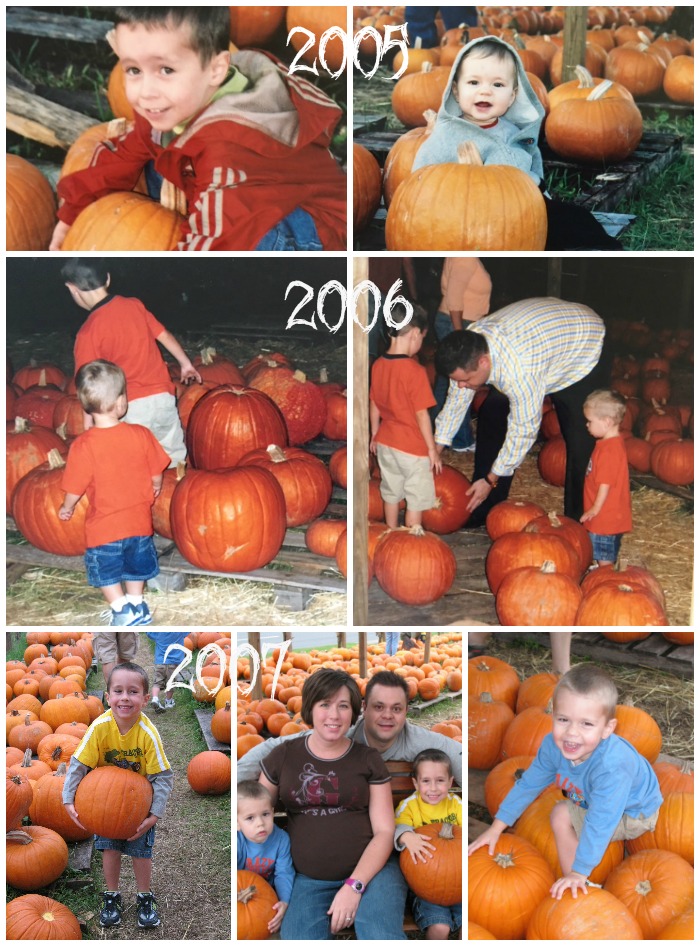 Over the next several years, parenting is ALL IN, man.  Hands on, action packed, non-stop.  Every so often, you add another little bundle of crazy to the mix and life just keeps getting bigger and better.  All things “preschool” are part of your daily routine.  For years, Nick Jr, the Disney Channel and PBS kids are where it’s at.  Time passes in a blur of dirty diapers and the Wiggles.  The older ones might make forays into school or sports, but you’ve still got littles around to keep your days busy and your nights more eventful than you’d like.

Life changes as the kids grow, but these are the prime tradition forming years.  The older ones start to remember fun experiences from one year to the next.  Not only do they remember, but they become your helpers in keeping the traditions alive and growing.  Before you know it, Halloween costumes are being requested and imagined by someone other than you!  The big kids remember that they were Bob the Builder last year, but this year they want to be something “cooler” and more grown up.  They know that a jack-o-lantern is absolutely essential to Halloween and they start begging you (way before it’s even appropriate) to take them to the pumpkin patch.  They know all of these things and they bring the younger ones along for the ride, teaching them not only what fun holidays can be but how they are celebrated in our family.

You think that life couldn’t possibly be any better or any different than this and still be any good at all. 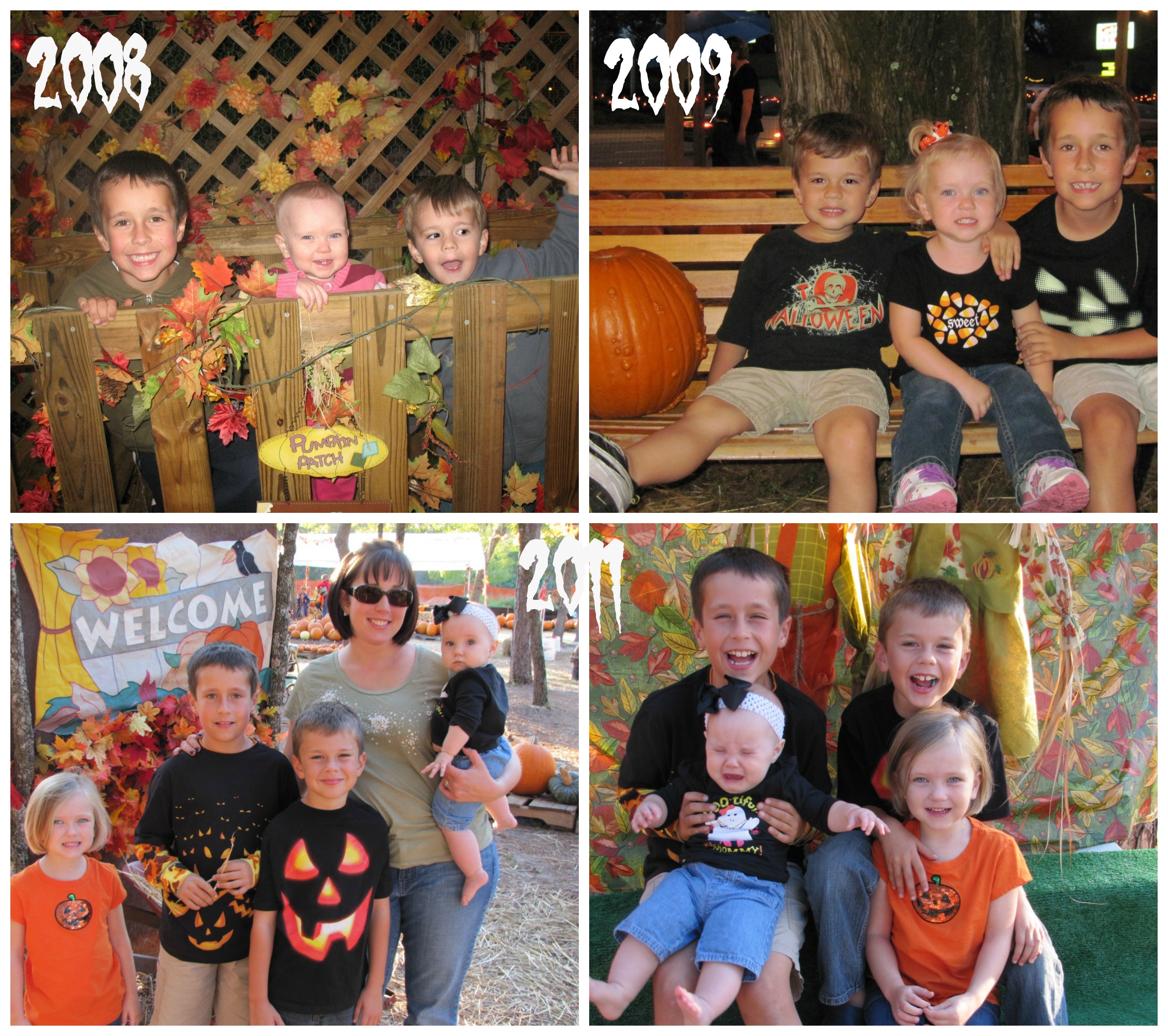 Have you looked carefully at the years I’ve imprinted on each picture, friend?  Did you notice anything a little off in this last collage?  I’ll give you a second…

Yep.  A year is missing.  I honestly couldn’t tell you why we didn’t go to a pumpkin patch in 2010.  If I wrack my brain hard enough, I seem to think of October 2010 as the year the Plague hit our house.  That we were trying to sell.  While I was pregnant.  So I’m kind of thinking we never made it that year.  Not because we didn’t have good intentions, but more because we simply didn’t have the wherewithal to make it happen.

Do you know what that tells me, though?   It tells me that our family was growing and kids were getting bigger.  Genius observation, I know, but stick with me here.  Remember what I said earlier about the pumpkin patch being more for the parents and less for the kids?  Here’s my solid proof.  As the big kids get older, especially once they’re in school, what is the most important part about Halloween?  Yes!  It’s costumes and candy!  As long as you’ve got that covered and as long as a pumpkin magically appears for Daddy to help them carve, they aren’t so concerned about how it was procured.  And the little ones?  Just like they got swept up into the excitement about the trip to the pumpkin patch, they’ll get pulled into the excitement of dressing up and begging the neighbors for treats.

Does that mean that we should say adios to a favorite tradition?  Do growing kids mean the obliteration of beloved traditions?

Parenting in general is teeming with needs for adjustment and tweaking.  What worked with one child won’t work with another.  We all know that.  Moms and dads are constantly upping their game to meet the demands of the players.  And so it goes with the pumpkin patch, my friend.  So it goes.

Teenage boys don’t want to go pick out a pumpkin and pose for pictures on a hay bale.  Unless it’s with their friends or a…ahem…girlfriend.  {{{shudder}}}  And frankly, you don’t have the time to fit one more thing in and amongst practices, games, school, homework, etc.

Enter the FALL FESTIVAL!!!  Does your parish or congregation have one?  How about your community?  Look around!  There’s usually a pumpkin patch nearby that you could swing through.  And if you can find one with carnival rides and funnel cakes, even better!  Not only will you get to spend some quality time with your family, but you’ll get to participate in the community at large which teaches your kids its own valuable lesson in and of itself.  It’ll be totally worth the arm and a leg you’ll spend on tickets.

So, moms.  Don’t be afraid to let your dearly held traditions change and morph alongside your kids.  Don’t hold yourself to standards that time and experience have told you might not apply anymore.  Listen to the little people.  Find out what is important to them and do it.  In the end, they won’t remember exactly where their pumpkin came from or how it was carved.  They’ll remember that their family had fun together.  And that feeling won’t ever leave their hearts…or yours.

fallkidsmom lifeparentingpumpkin patch
Finding My Marching Orders in Psalm 37
A Saintly Friend & My View of the Canonization of St. Mother Theodore Guerin

1 thought on “Parenting & the Pumpkin Patch”