A Saintly Friend & My View of the Canonization of St. Mother Theodore Guerin 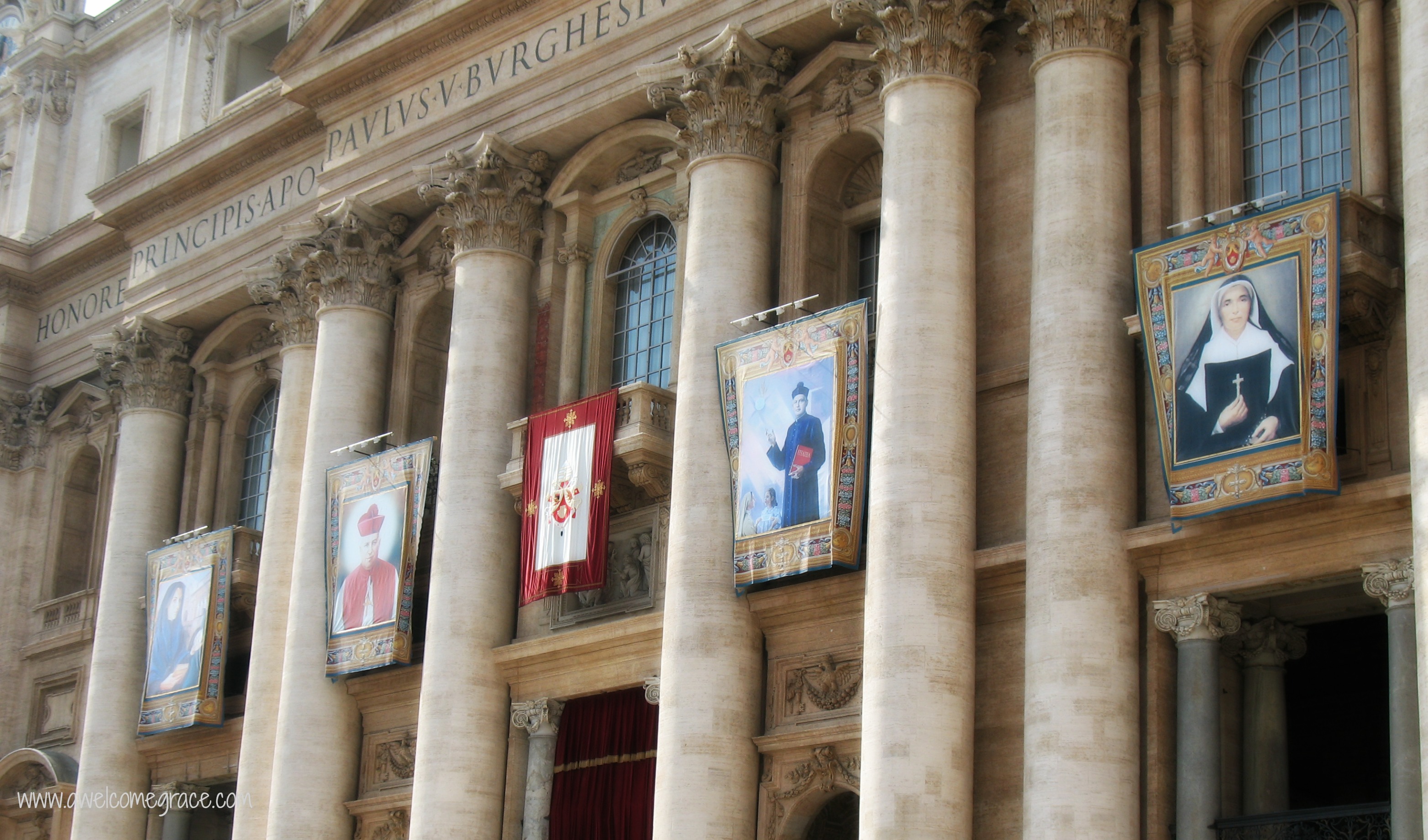 Say you have this friend who is a really amazing person.  She’s brave, intelligent, faithful, and has a great sense of humor.  A prolific writer, her words are inspirational to everyone who reads them.  She stands up for herself and her friends against tyranny, but is gentle and unassuming at heart.  Basically, anyone who knows her loves her.

Over the course of years that you know her, she gets more and more accolades for the good works that she does.  You don’t think you could be any prouder of this wonderful friend.  Until the day comes when she gets the biggest promotion possible.  The highest honor that can be bestowed is hers!  And, wonder of wonder and miracle of miracles, YOU are lucky enough to be there when it happens.  You’d be psyched, right?

Well, in 2006, I had the pleasure of witnessing my dear friend receive the highest honor our Church can bestow.  Let me introduce you… 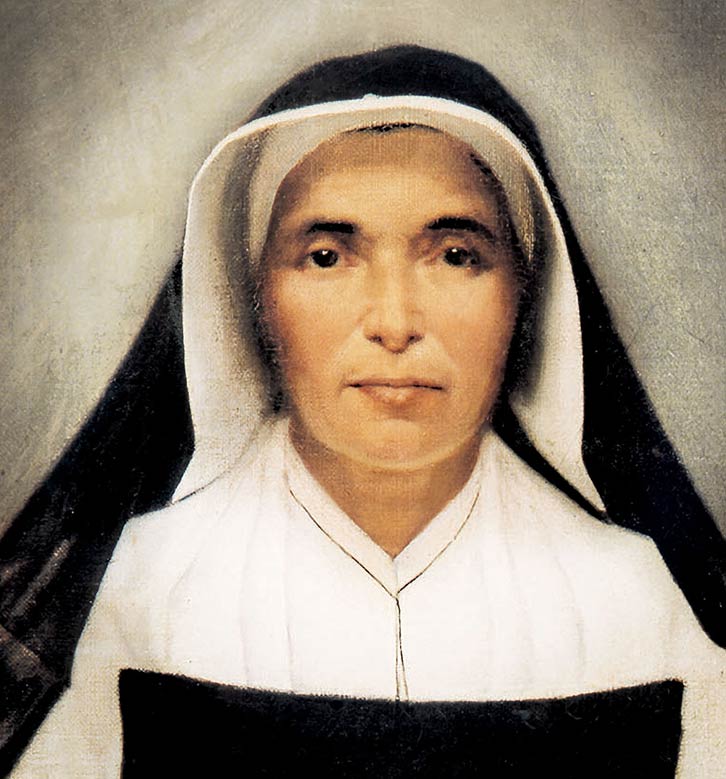 Love all in God and for God, and all will be well.

Honestly, I don’t think there’s a better example of Mother Theodore’s own words that would describe her any more thoroughly.  St. Mother Theodore Guerin was a 19th century French nun who answered God’s call to trust in his Providence and travel to the wilds of rural Indiana.  There, she founded both the Sisters of Providence in the United States and St. Mary-of-the-Woods College, my alma mater.

The plethora of letters she wrote to her motherhouse back in France and with her sisters all over the state recorded timeless pearls of wisdom.  Here are just a few of my favorites.

If you lean with all your weight on Providence, you will find yourself well-supported.

Let us take courage, my very dear Sisters; the Cross, it is true, awaits us at every turn, but it is the way to heaven.

The way is not yet clear. Grope along slowly.

And one of the more timely ones for today…

Woman in this country is only yet one-fourth of the family. I hope that, through the influence of religion and education, she will eventually become at least one half — the “better half.”

Long story short, I was introduced to this valiant woman well over 100 years after her death.  When I became a student at the college she founded, she was Venerable Mother Theodore.  In the Catholic faith, this means that she had been recognized as living a virtuous life to a heroic degree.  When I was a senior in 1998, the first miracle attributed to her intercession was approved by the Vatican and she was declared Blessed Mother Theodore by Pope John Paul II in October of that year.  Just eight short years later, a second miracle was approved and the Sisters of Providence happily shared that she would be canonized. Not only that, but they were asking any who wanted to attend to join them on their pilgrimage to Rome.

My View From the Choir 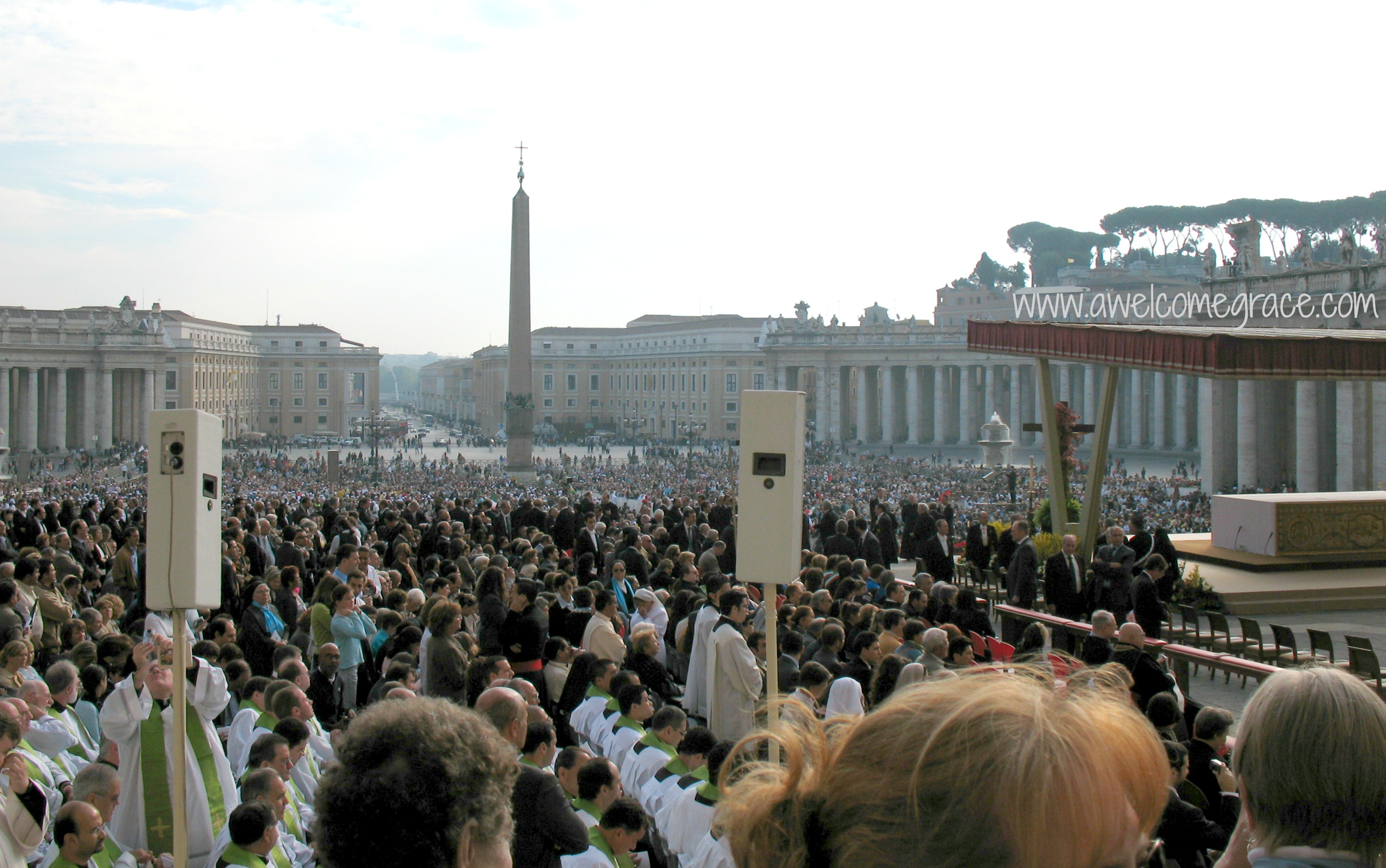 On a beautiful day in October 2006, my mom and I joined the thousands upon thousands of people filling St. Peter’s Square.  Not only were we in the square, but we were members of the choir!  Our seats were located behind the altar, right on the steps of St. Peter’s Basilica.  We kept wanting to pinch ourselves the entire time.  How could this be real?  How could we be here and doing this? 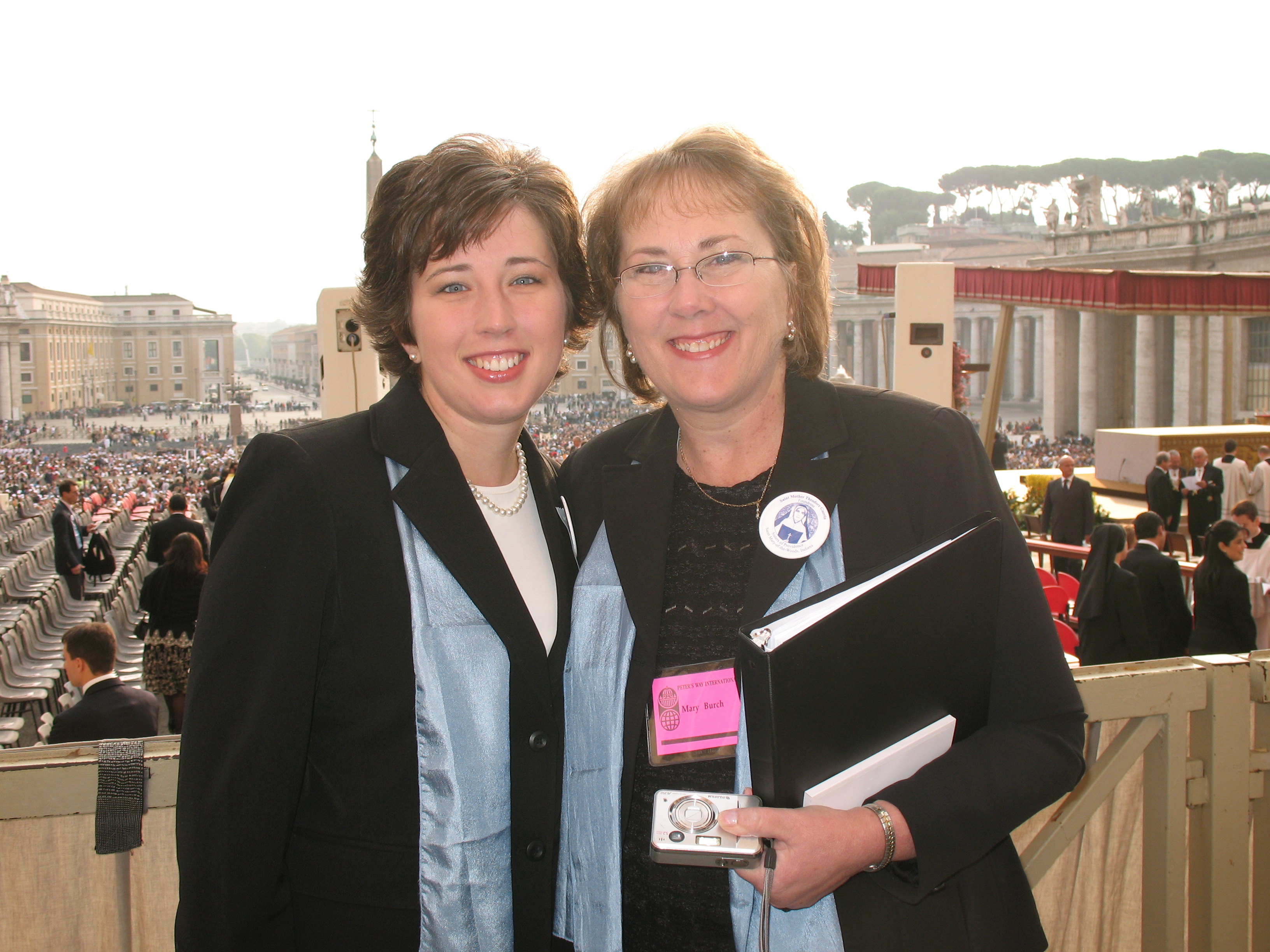 (Mom and me, once Mass was over.  All of St. Mother Theodore’s pilgrims sported that snazzy button and blue scarf.)
Friends, I may have used the zoom feature on my first-edition digital point and shoot, but this was my view of the Holy Father, Pope Benedict XVI, for the Mass. 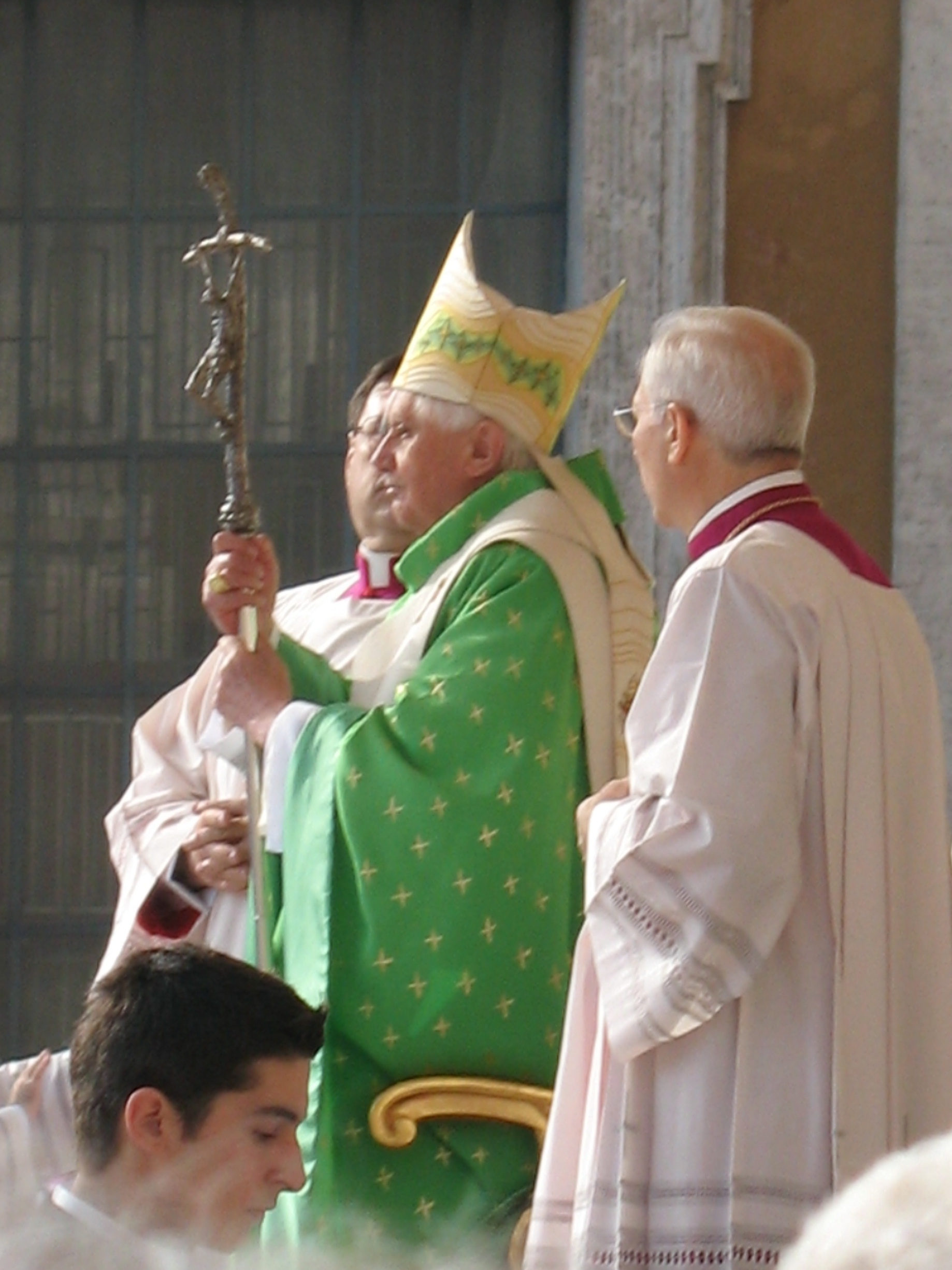 During the Mass, four saints were canonized.  Pope Benedict spoke of the merits and miracles of each one.  Representatives for each saint made offerings of relics and, if possible, the recipients of the miracle were present.  It truly was one of the most moving experiences in my life as a Catholic.  (In the top middle picture, below, you can see Phil McCord.  His rapidly declining sight was restored after praying for Mother Theodore’s intercession.) 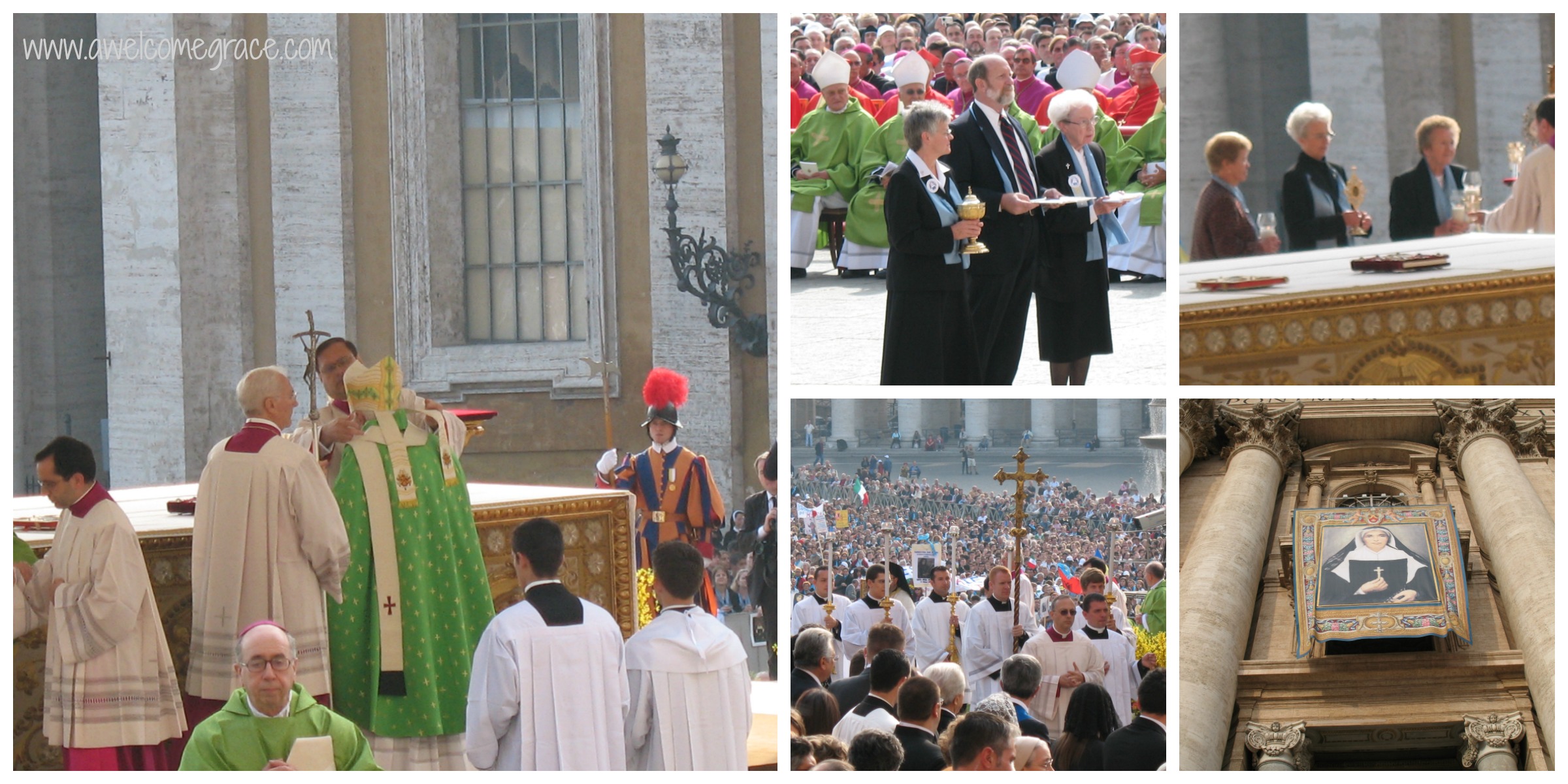 The joy was palpable.  Never in my life had I experienced that amount of faithful people in one place.  The beauty and majesty of the Church was shining for all to see.  She was wearing all of her finery that day and the four new saints were jewels in her heavenly crown.  Truly, I don’t think I will ever be witness to the like of that day again.

My Friend, the Saint

So, yeah.  I have a friend who is a saint.  No big deal.
She has been interceding in my life for over 20 years now.  I firmly believe she led me to The Woods way back when.  She knew that there I would make dear friends, meet the young man I would spend my life with, and grow in my vocation.  Because of her, my life is was it is.  If she hadn’t had the courage to leave her home and build a women’s college, my life would be unrecognizable to me.
I ask her intercession when I am in need of prayer.  I look to her words for courage, support, and wisdom.  And because of her, I know that saints are really just people.  How?  Let her tell you…

What must we do to become saints?  Nothing extraordinary, only that which we do every day — only do it for His love.

2 thoughts on “A Saintly Friend & My View of the Canonization of St. Mother Theodore Guerin”