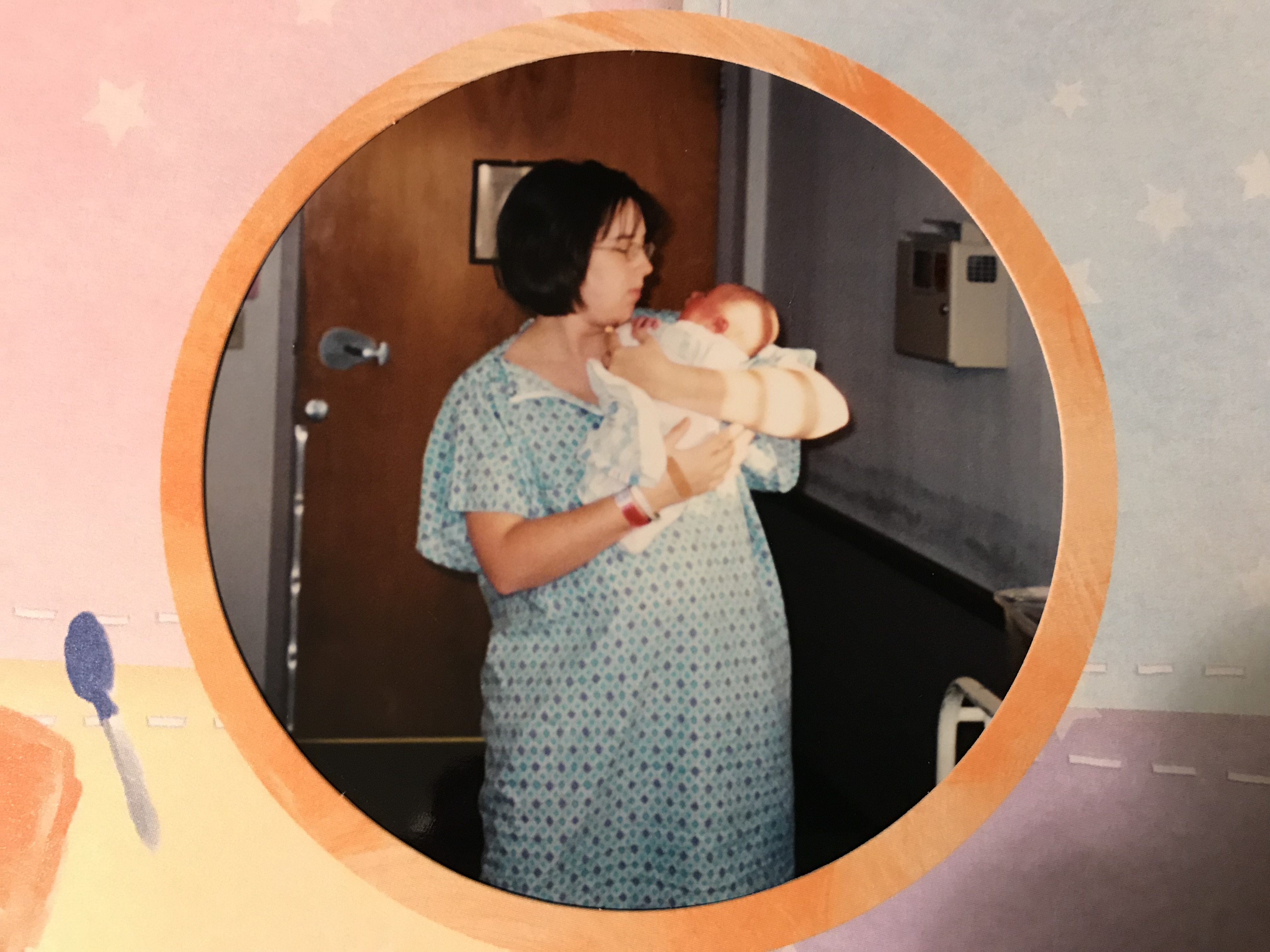 Sixteen years ago, I had a baby boy.  I became a mom.

This dark haired, dark eyed young man we know now, so tall and loud and confident, made a very quiet arrival into the world.  It was a baptism by fire into motherhood for me.  And I still remember every minute, even all these years later.

I was teaching 4th grade at Immaculate Heart School at the time.  But with a due date less than a week after we returned from Christmas break, I hadn’t gone back to work after the holiday.  And while I enjoyed the laziness at first, it really was no fun to just sit at home, growing larger and larger by the minute, watching my due date come and go.

Greg and I would go for walks along the ravines, empty before monsoon season, at night.  Up and down, up and down.  Trying desperately to get that baby out of me!  I remember at one point, stopping midstep, busting out crying, “I just don’t want to be pregnant anymore!”  Greg took my hand, kissed my forehead, and we kept on walking.

I went for my 40 week checkup and…nothing.  No progress, no change.  And the baby, we didn’t know yet whether it was going to be a boy or a girl, hadn’t dropped at all.  The doctor said it was time to make an appointment to induce.  She’d give me until 41 weeks, but then it was eviction time.  Go home and rest up, she said.  “And hopefully I’ll see you before next week!”

They don’t call it labor for nothin’.

Finally, the day had arrived.  Forty one weeks, exactly, and not a centimeter dilated.  In we went for the 4:00 pm induction, not having any idea what was headed our way.  Sure, we had gone to the birthing class and read the books.  But nothing can prepare you for actually being there and having all of these concepts apply to you!

Greg and I walked in to the birthing room together.  I was 24 and he was 25.  We lived a thousand miles from any relatives (though my mom was getting on a plane at just about that exact moment) and were the first ones of our local friends to have a baby.  We were so nervous!

At 4:30, I got my dose of Cervidil.  I was told to just relax, enjoy my evening, and they’d start Pitocin in the morning.  We tried to settle in and do just that.  Well, we tried anyway.

About an hour later, however, I noticed that every few minutes I’d feel a twinge and a tightening.  I’d had a lot of Braxton-Hicks contractions, but none of the real thing.  Nothing that was ever painful.  Until now.  Looks like that Cervidil had been just the little push my body needed to jumpstart labor!  No big deal, though.  I could still walk and talk through the contractions.  I was doing just fine!  Which was encouraging, considering I really wanted to have a “natural” (read: unmedicated) birth.  Riiiiiiiiiiight.

By the time my mom arrived from the airport, it was about 9:00.  I was definitely contracting regularly, definitely in labor, and definitely NOT having the restful evening everyone had anticipated.  It was baby time!

On and on through the night I labored.  Pacing, standing, rocking.  Mom and Greg took turns rubbing my back and legs and feet.  It really wasn’t too awful.  But the later it got, the worse it got and by about 3:00 in the morning, I was fried.  I was 7 centimeters, in transition, and begging for an epidural.

Epidural on board by 3:30, it was time to rest and wait patiently for the urge to push.  Or so I thought.

Greg had fallen asleep on the couch.  Mom was dozing in the rocking chair.  I had just started to relax and try to go to sleep.  The lights were out.  It was so quiet.

Then the beeping started.  Nurses streamed into the room, one after the other, and the room filled with lights.  “Turn on your left side, sweetie.  Baby’s heartbeat is a little slow,” they said as they slapped an oxygen mask on my face.  “Now, turn to your right.  That’s it, roll back and forth.  We need to wake this little one up!”

It didn’t work.  “OK, Beth.  You’ve had an epidural, so we’re going to help you, but we need you to get up on all fours and rock back and forth.  We need to find this heartbeat.”  Just imagine.  Nine and a half months pregnant, exhausted, with an epidural, in a hospital gown.  I’m sure it was a lovely sight!  I didn’t care, though.  I would’ve swung from the rafters if it would have helped them find that heartbeat!

And find it, they did.  After that, though, there was no rest.  I was stuck in one position, propped up on pillows, with oxygen at the ready.  They didn’t tell me until later that, according to the clock they’d started when they lost the heartbeat, I had been about 30 seconds away from an emergency C-section.

Labor continued.  No more heartbeat scares, but the contractions just kept getting more and more intense.  But I have an epidural!  I thought.  I’ll just keep pressing this little plunger for more meds!  Silly, silly me.

Sure enough, that urge to push arrived.  And it arrived with gusto!  At 5:30 in the morning, the doctor came in and my mom went out.  The more I pushed, the more I wondered why this hurt so bad!  Shouldn’t it hurt less if I had an epidural?

Greg was on my left side, the nurse was on my right.  They told me to push, to pant, to rest.  At one point, Greg looked down and said, so excitedly I’ll never forget it, “Pumpkin!  It has an ear!”

“It damn well better have two of them!” I so sweetly replied.

A second later, the nurse’s face got serious.  She looked into my eyes and said, “Don’t push.  The baby’s cord is very tight around its neck.  The doctor needs to cut it now, so don’t push.”

What seemed like minutes, but was actually seconds, passed.  The nurse then told me to push with everything I had.  And so I did.

And a little baby boy was born.  Quietly.  Without crying.  And with a blue tinge.

They whisked him over to the warming table.  Not into my arms, like I had hoped and planned.  All of a sudden, I noticed that there were extra people in the room.  A pediatrician, extra nurses.  My baby wasn’t crying.

“Please cry baby,” I said.  “Come on!  Please cry!”  Over and over through seconds that seemed like an eternity.

And then came the sweetest sound I had ever heard.  The tiniest whimper turned into a full on wail.  He was going to be OK. 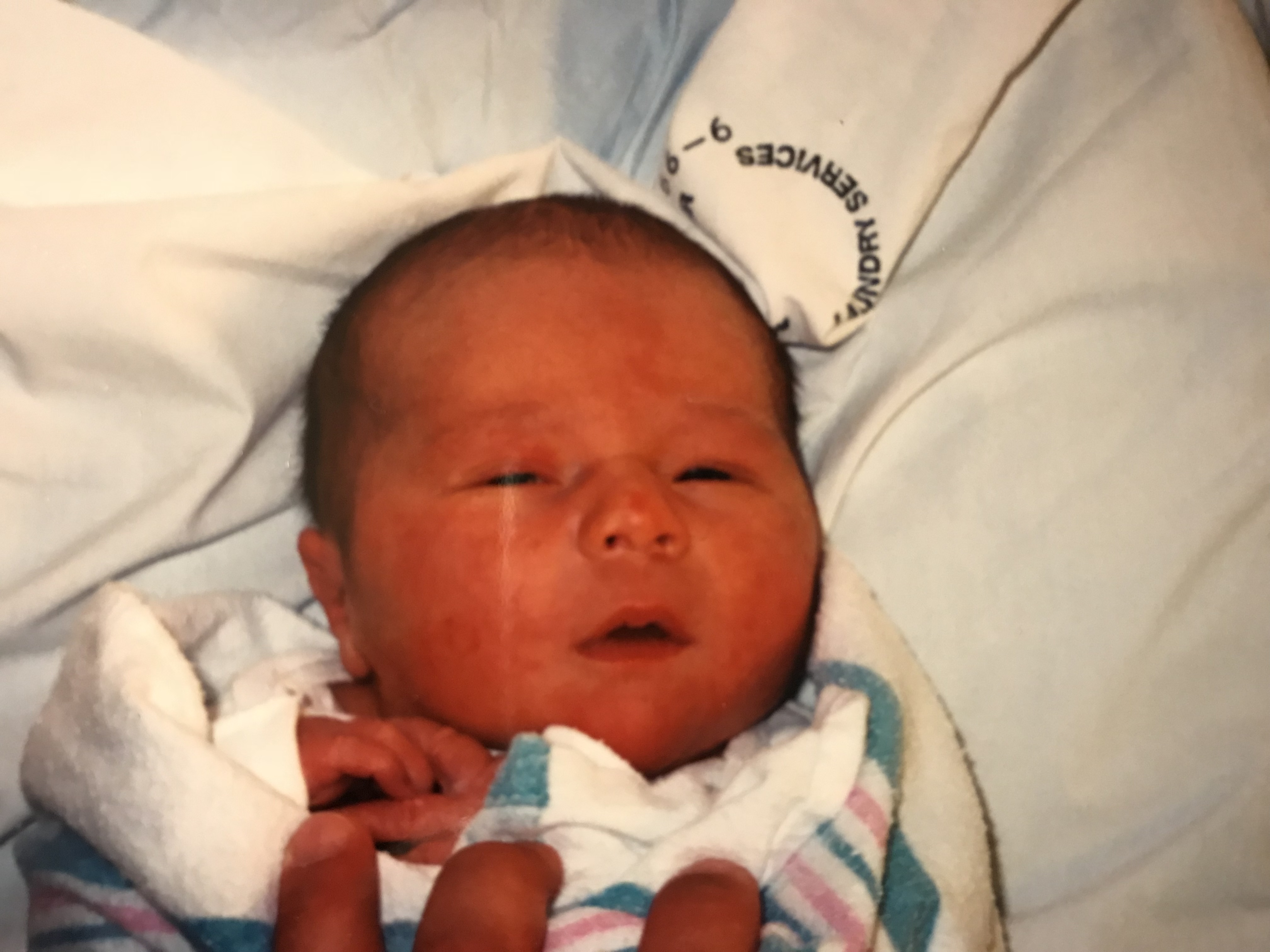 A little oxygen waved under his nose and a little stimulation was all our little guy needed to get his act together.  And that epidural I had?  Well, we later discovered that the bed had received all of the medication!  All of my acrobatics when we were trying to find his heartbeat had dislodged the catheter from my back.  No catheter, no meds.  No meds, no pain free delivery!

But a short 13 hours and 45 minutes after we had arrived at the hospital, and with only 15 minutes of pushing, we were parents.  We had a son.

That son is now 16 years old and every inch of six feet tall.  And I’m fairly certain that the only time he’s quiet anymore is when he’s sleeping.

Thank you, Lord, for this boy of ours.  For every minute we’ve had with him this far and every one we have ahead of us.  It is an honor to be his mother.