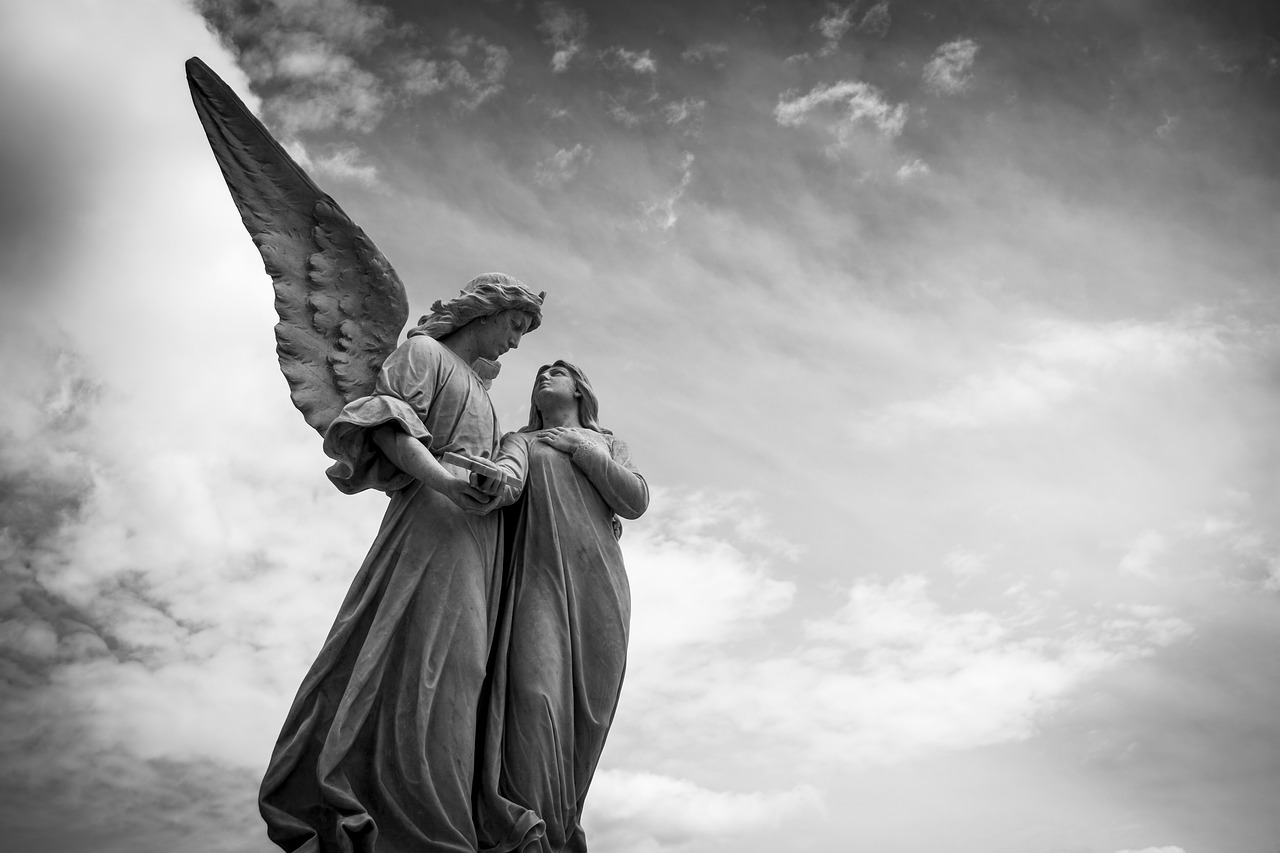 Today is a pretty cool day.  It’s the Memorial of the Guardian Angels, friends!  Have you thanked your guardian angel for keeping you safe from harm lately?

When I think back, I marvel at the number of times my angel must’ve stepped in to steer me in a better direction or protect me from serious harm.  But there are two instances in particular that stand out in my mind and I’d like to share those with you today.

When I was nine years old, we lived in a century-old German farmhouse in southern Illinois.  The home was brick and the front steps were made of concrete.  There were two of these steps that led up to the front porch, then another step up into the front door.

One morning as my mom was trying to get the three of us kids out into the car, she and I had been arguing.  I honestly don’t remember what we were arguing about, but I do remember that it had put me in a foul mood.  As the oldest child, I’m sure it had something to do with her telling me to help and me not wanting to.

My younger brother was 2 years old at the time.  He could walk, of course, but wasn’t necessarily steady on his feet, especially around stairs.  Well, that particular morning, I went storming out the front door and didn’t close it behind me.  I assumed that the others were following.

As soon as my feet hit the sidewalk at the bottom of the stairs, I heard my mom call my name…again…from the inside of the house.  I turned around and threw my hands out in front of me and yelled, “WHAT?!”

And wouldn’t you know it, my little brother’s blonde head landed right in my open palm.  Unbeknownst to anyone, he had followed me out the door and tripped on the concrete steps.  If I hadn’t turned around, he would’ve cracked his head open.

I still don’t know if my mom actually called my name or if it was a shoulder tap from my angel (or my brother’s!).  I’m just glad it happened.

I’ve always believed that babies are a little more in tune to spiritual things than we tainted adults are.  My mom says it’s because they’re so fresh from heaven.  This story just proves the point.

One day when my oldest son was just a few months old, he was playing on a blanket on the floor of our apartment.  We had a sliding glass door and the sun was just streaming in through the vertical blinds onto the blanket where Adam lay.  He seemed happy enough with his toys and he wasn’t mobile yet, so I took the chance to go into the kitchen and get some work done.

Before I knew it, I heard him giggle.  And I mean giggle!  This wasn’t just a happy baby noise.  This was the sound you get when you’re working hard to make a baby laugh.  They squeal and giggle and make their talking noises back to you and it’s the best thing ever.  Except we were the only ones home.

I looked around the corner and what do you think I saw?  My little guy had rolled himself over so that he was facing the sunlight…the kind of light that literally looks like beams coming through the open window.  And he had the sweetest, happiest face!  And whoever he was laughing with and baby-talking to, well, he could certainly see them.  But I could not.

I will always and forever be so thankful to my parents for teaching me the guardian angel prayer as a little girl.  I’ve said it myself numerous times and have taught it to my own children as well.  They would tell you that it’s especially good when you can’t fall asleep after a bad dream.

Thank you, Guardian Angel.  Thank you for bridging the gap between earth and heaven.  For keeping me safe and for protecting my family.

Angel of God, my guardian dear, to whom God’s love commits me here.  Ever this day be at my side to light and guard, to rule and guide.  Amen.

For more of my thoughts on guardian angels, head over to Blessed is She to see my latest blog post!  It was so interesting to me to find out more about how people envision their angels and the ways they’ve acted in their lives.

angelfaithguardian angelprayer
September Reads: Who knew I was boring?
The “Joys” of Being 41