Now that I’ve been home for a few days, the time has come for me to unpack from my trip…both literally and figuratively, of course!  Because you know darn well that my suitcase is up on my bedroom floor, still half-full of things I took with me.  Literal unpacking takes a lot of work!

But figurative unpacking?  That’s way more fun!  It involves looking at pictures, reliving fun times, and drooling in hindsight over the most amazing meals.  Way better than sorting dirty laundry, don’t you think?

Follow along with me here and I’ll share with you the fun things my mom and sister and I did during a long weekend in Washington, DC!  We were there for 4 days in total, but only spent 2.5 days sightseeing.  The other day and a half were spent at the Blessed is She Wild Retreat (more on that soon, I promise!).

We really managed to pack quite a lot into a short amount of time.  Sure, there were things we didn’t see.  You could easily spend a week in DC and still not see everything.  But I think we managed to get a really good taste of a really great city.

The Mall in the Fall 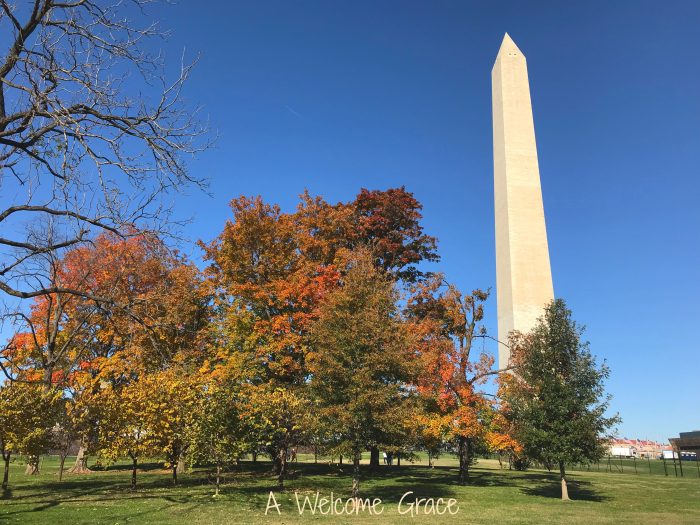 We spent our first afternoon walking the National Mall.  For the cost of an Uber from our hotel, we saw monuments and memorials galore.  The Washington Monument, the World War II Memorial, the Vietnam Wall, and the Lincoln Memorial totally lived up to the hype! 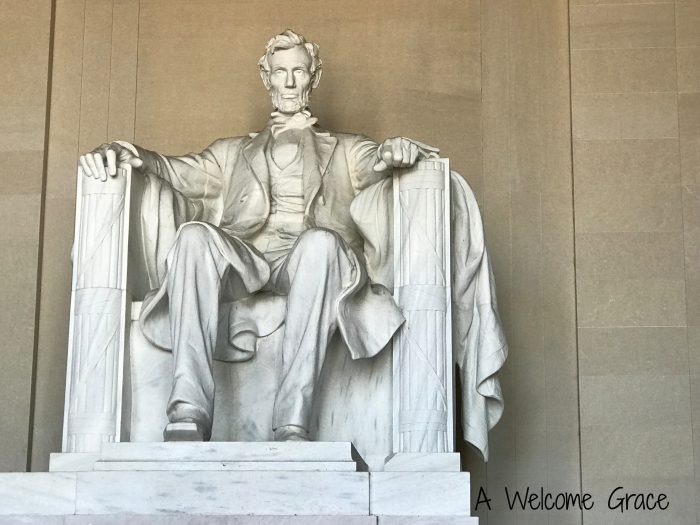 I had visions of Jenny from Forest Gump as we strolled along the reflecting pool.  Who knew it was less than 6-inches deep?!

Then, as we walked along the Vietnam Wall (which was way different than I expected), I got to witness a really touching scene.  A veteran was being pushed along in his wheelchair by his daughter.  When they came to a certain panel, they stopped.  The daughter helped her dad to stand up and they searched the wall for a name.

After a moment, the veteran slowly raised his cane up and tapped a spot near the top.  “That’s it.  There he is,” he said.

Right then, along came a young park ranger carrying a ladder.  He stopped as the veteran showed him the name, then climbed the ladder and rubbed a copy of the name onto a paper.  Once he was done, he came down and handed the paper to the veteran.  They shook hands, and the young man walked away as the veteran settled back into his wheelchair.

It was so special to see. 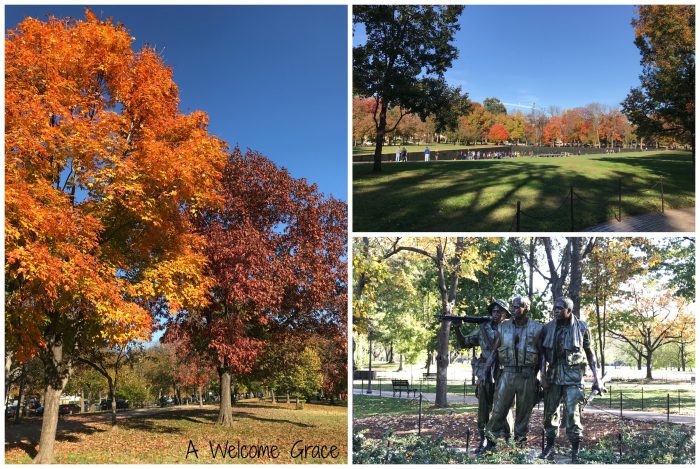 OK.  Here’s the deal.  If you ever go to DC, you have got to make a dinner reservation at Founding Farmers.  Just be prepared to not be seated until about half an hour after the time of your reservation.  The place was hopping when we were there on a Thursday night, but once we sat down, the food and drinks and service were all fantastic.  And the desserts we ordered?  Shut the front door!  That peach and blueberry crisp with cinnamon ice cream was slap-your-mama good!

If it’s brunch you’re looking for, stop by Darlington House in Dupont Circle.  Louis Armstrong and Ella Fitzgerald were piped through the speaker system as we sat in the sunshine of the front bay window of this row house restaurant.  Omelets, benedicts, and freshly fried doughnut holes filled our bellies and perfect peach bellinis rounded out the experience.  And what was happening right outside while we ate?  Why, the weekly Sunday farmers’ market, of course!  Which leads me to our next favorite meal…

After brunch, we wandered the market and managed to pick up some fresh-baked Italian bread, small batch gouda and cultured butter, and apples that had just the day before been hanging in a tree.  And let me just say that if you think three women can’t polish off all of that in one day?  Think again, my friend.  Think again.

National Shrine of the Immaculate Conception

Let’s just be real.  Basilica of the National Shrine of the Immaculate Conception is a really long name.  Let it henceforth in this post be known as The Shrine.

Whatever you call it, this is one of the most gorgeous cathedrals I have ever seen in my life.  There were so many statues of the different devotions to Our Lady, small altars and places to pray.  The mosaics were breathtaking and the size and scope of everything just drew me in.  Every corner I turned, I felt drawn to something even more detailed and beautiful. 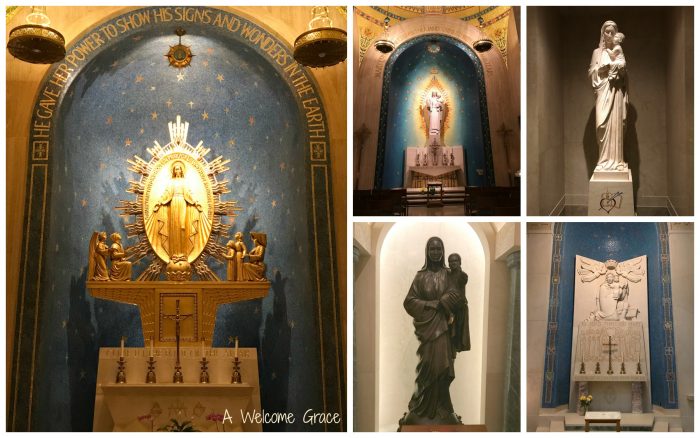 My mom and sister both agreed with me that we could spend not just hours, but days in this place!  We didn’t even see the crypt church in the basement or get to really spend time in the different alcoves depicting the 4 sets of mysteries of the rosary.

One thing that we did see, though, was so incredibly special to me!  We got to see the statue of St. Mother Theodore Guerin, founder of my alma mater, St. Mary-of-the-Woods College.  The statue was on the grounds of the Shrine, adjacent to Mary’s Rosary Garden.  It was so peaceful and beautiful.  Walking up to the statue felt like walking up to meet an old, dear friend.  It was lovely to hand her my class ring for a moment and to thank her for all of the beauty that her life of service lends to my life 150+ years after her death. 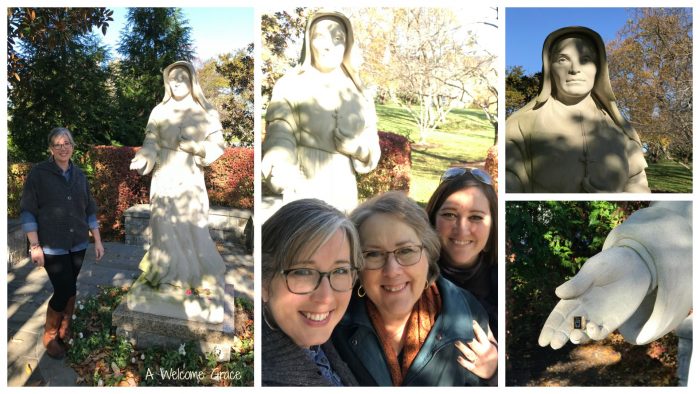 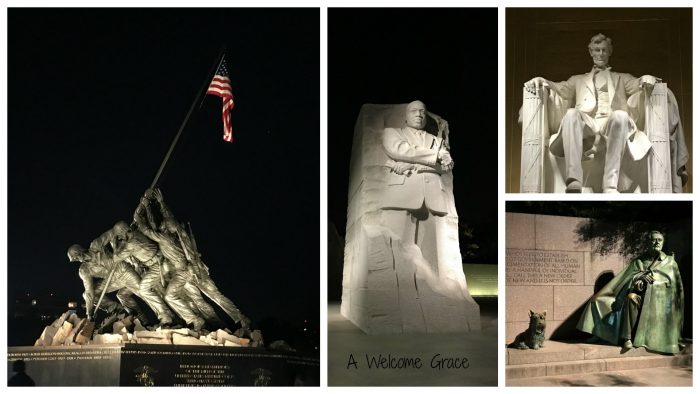 You can’t have a trip to DC without hitting up at least one of the Smithsonian museums.  As for us, we decided to check out the National Museum of American History.  There were other museums we would have loved to explore…the Natural History Museum, Air & Space, or African American History museum all seem really amazing!  I guess we’ll just have to plan another trip, yeah?

And of course, we walked by the White House.  You know, you’d think such a famous house would be pretty easy to find, right?  But no!  It amazed me how many Lyft drivers couldn’t tell us exactly how to get there.  And who do you think is depicted in the giant statue smack dab in the middle of Lafayette Square?  Not Lafayette, that’s who!  Nope.  He’s off to one corner.  Andrew Jackson takes center stage.

The Monuments by Moonlight tour, though, was amazing.  Despite crazy disorganization on the part of the Old Town Trolley Company, they did manage to put on a really great tour.  We got to add the MLK Memorial, Iwo Jima Memorial, Korean War Memorial and Roosevelt Memorial to our list of places visited.  And the driver/tour guide was fantastic! 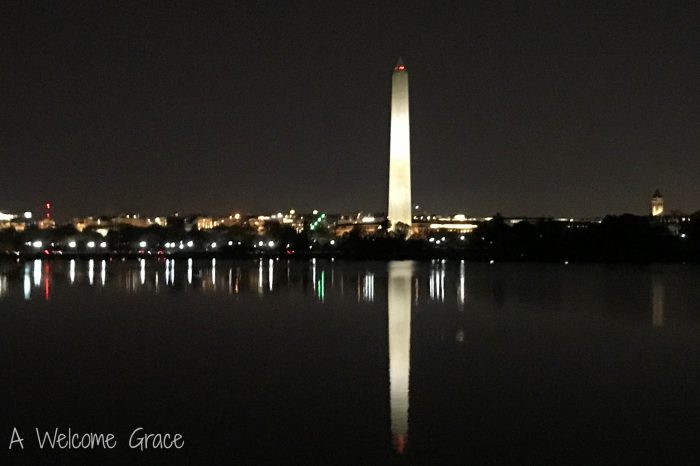 So, like I said.  I really think we did a bang up job of fitting lots of amazing adventures into a short period of time.  And I wouldn’t have traded the time with my mom and sister for anything!  We created memories that will keep for years and years.

Oh! And I’m so glad we didn’t rent a car! Driving in DC is not for the faint of heart!