Popular Opinion Made Us a Couple, Love Kept Us One 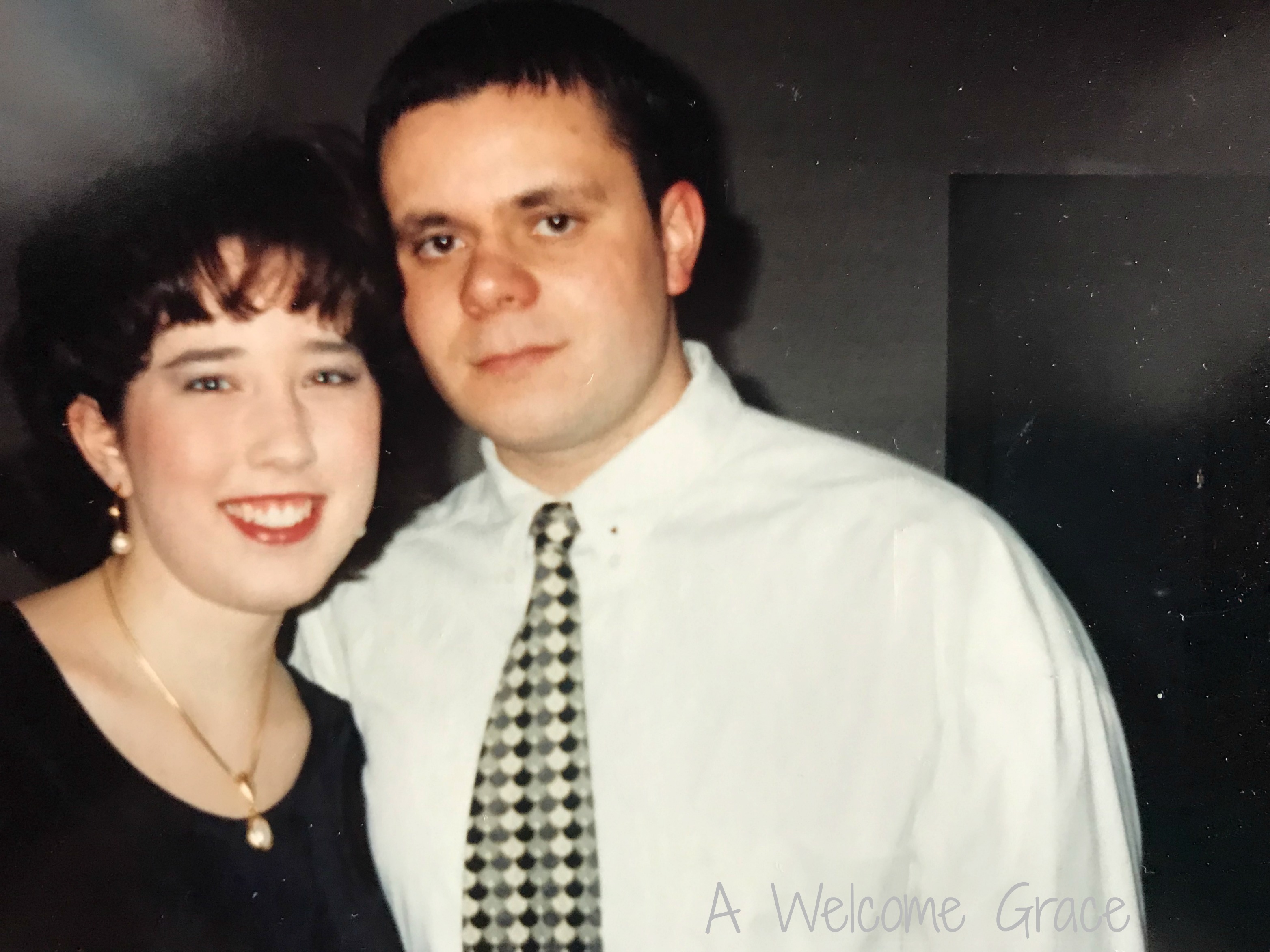 It was a usual Thursday morning, earlier this month.  Greg was getting ready to head to work.  The kids were making their lunches and being reminded to brush their teeth.  It was pretty darn normal (i.e., typically crazy) in our kitchen.  But it wasn’t just any old day, no!  It was our 23rd dating anniversary!  On that absolutely blessedly insane, totally ordinary Thursday, it was twenty-three years since we became boyfriend/girlfriend.

The fun came when I decided to tell the kids exactly how we became boyfriend/girlfriend.  They already knew the crazy story of the first time we met.  In that story, I’m the one who looks like a fool.  So I thought it only fair that I tell them this story…in which Greg comes away looking a little silly.  I mean, fair’s fair, right?

A Phone Call to Start

So, yes, things went a little haywire the first time we met.  I hadn’t been expecting to meet my future husband that evening in my friend’s dorm room and I wasn’t exactly on my best behavior.  But life moved on, we met a second time, and we both charmed the heck out of each other.

Unfortunately, right after we met that second time, Christmas break rolled around.  I went home to my family in southern Illinois and he went to spend the holiday at his grandparents’ house in Northern Indiana.  I knew that I really hoped we’d see each other when we got back to school, but no plans had really been made to that effect.  Until one night when I just happened to go to my sister’s high school basketball game.

When I got home from the game that night, my mom told me that I had had a phone call from a certain young man and that there was a message by the phone in the kitchen.  At this point, my 5 year-old sister started jumping around like a fool singing, “A boy called!  A boy called you!  His name is Williby Wallaby Woo, an elephant sat on you!”

And as annoyed as I was at her prancing and kindergarten-ness, I was absolutely thrilled that he had called!  But I was slightly flummoxed at the same time, as I didn’t remember giving him my home phone number.  (See, children, this was back in the prehistoric days of landline phones, no social media, and no Google.  Yep, we’re that old.)

When I called him back, though I don’t remember if it was the same night or the next day, he told me how he had managed to track me down.

“Well, I called Brian since he’s dating Alison.  I figured she’d have your number since you guys are friends and she had it in your student directory.  So she called him back and he called me back and then I called you.”

We talked for a while and then came to exactly why he had called.  His fraternity was having their formal dance the weekend after everyone arrived back from break and he wanted to know if I would like to go with him!  Then, my good ol’ boy scout showed me just how thoughtful he was.  He said, “I wasn’t sure if you’d have a dress at school that you could wear, so I wanted to ask you in time for you to have whatever you’d need.”

Be still my teenage heart!

Well, we went to that dance (See the picture at the top of the post?  That’s from that night!  If only I had learned about eyebrow maintenance back then…).  And we 100% hit it off.  Being with each other was exciting and thrilling and yet comfortable at the same time.  It turns out that he was every bit as smart and funny as my friends told me he was.  And I’m pretty sure he thought I was pretty alright, too.

A month went by with lots of phone calls, hanging out on the weekends, spending time with friends and each other.  And it wasn’t long before my friends started calling him my boyfriend.  That wasn’t too shocking to me, even though I hadn’t used the word yet myself.  What took me by complete surprise was when I’d hear his fraternity brothers refer to me as his girlfriend!

See, when I went to college, I had told myself that dating was fine, but I didn’t want anything serious.  I was too young!  No boyfriends for me, thanks.  Not until I was a junior or something.  Well, like they say, if you want to hear God laugh, tell Him your plans.  And I’m sure He was laughing his head off that fateful night in 1996 when  Greg and I cozied up together on the couch.

And By Popular Demand…

It was early February in Indiana, so while I don’t remember exactly, my memory tells me it was brutally cold.  Greg and I were snuggled up on a couch in the corner of his fraternity house’s common room, which was walled on two sides by sliding glass doors.  Basically, it was a room-sized refrigerator.

We came to a lull in the conversation as someone walked through the room.  They smiled that “aw, shucks” smile at us that people give to new couples.  You know the one I mean, all full of teasing and joy at the same time?

When they left, Greg said to me, “You know, everyone is saying that I’m your boyfriend and you’re my girlfriend.”

Cue the butterflies in my stomach!  Something was happening!!  I would’ve died right there and then, I think, if he hadn’t been holding my hand.

“Well,” he said, “if everyone is saying it and if you don’t mind, then I don’t know why we shouldn’t just be democratic about it and go with what they’re already saying.  So, will you be my girlfriend?”

And then I laughed and laughed!!!

OK, so not really.  I may have chuckled a bit, ribbed him on his oh-so-romantic choice of words.  But never fear, friend.  I enthusiastically let him know that yes, I would very much like to be his girlfriend.

And the rest is history.

And, in fact, I’ve liked being his girlfriend for 23 years now.  Between you and me, I think it’s been a pretty good run.  I think I’ll keep him around for a while longer.  Because, even though popular opinion is what made us boyfriend and girlfriend in the beginning, it’s LOVE that has kept us that way.  Meeting each other and beginning our love story at such a young age has made us who we are and molded us into one another.  And I love getting to share our story with you.

Especially seeing as our 20th wedding anniversary is coming up this summer!  (Keep your eyes peeled for more on that sometime in June!)

Beth & Gregdatingmarriageyoung love
Winter Reads: Four is Better than None
8 Things This Church Singer Wishes You Knew About Music Ministry