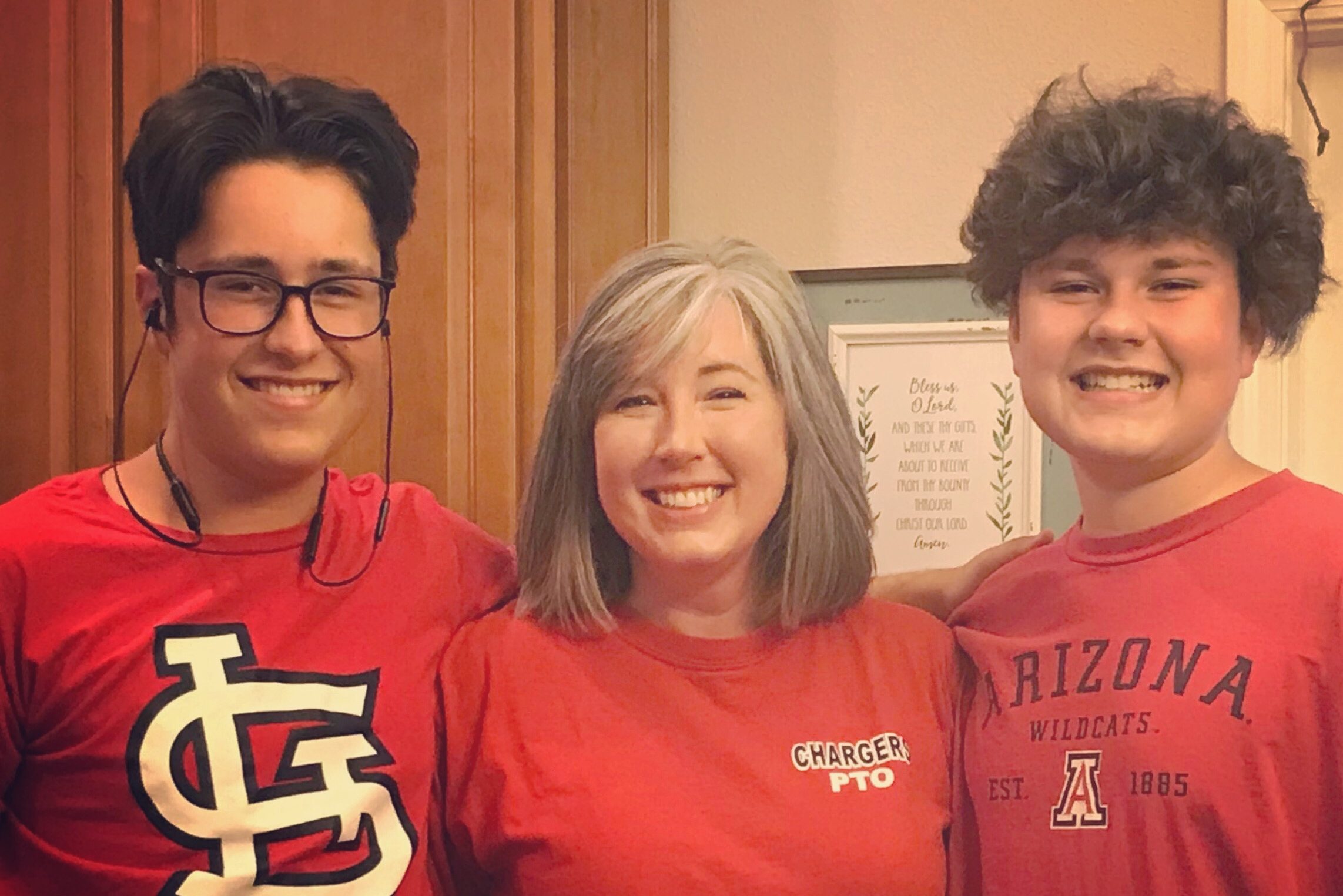 “I love you, Mom” he says as he wraps me up in a hug, my gigantic, 14 year-old, 6-foot tall man-child.  I lay my head on his shoulder, then, and say, “I love you, too, son.  Have a great day.  Make good choices.”  Then he gives me a one-sided smile and says, “I will” as he gives his curly hair a toss and walks out the door to catch the bus.

It’s the morning dance we do.  It’s not our only dance, mind you, but it’s one of my favorites.

See, mothers and sons begin learning to dance together long before that iconic wedding reception performance.

The dance starts before he’s even born.  The rocking and swaying as we walk our way through 9 months of togetherness sets the tempo.  And his life begins with the two of us perfectly in sync.

During the baby years, moms learn the rhythms their sons prefer best.  She knows the intrinsic meanings of his movements.  Eating, sleeping, playing, laughing over every coo and every cry.  He initiates, she responds.  She leads him and teaches him gently how the dance will go.

The toddler years arrive and the tempo changes.  Maybe it would be more accurate to say that it becomes erratic?  At the blink of an eye, a turn of a phrase, or the missing of a nap the gentle, swinging beat turns positively frenetic.   But, just as quickly, it can turn back again.

The toddler becomes a boy and the dance becomes positively vigorous.  His dance turns into one that involves running, kicking, swinging bats and shooting goals, school work and scout meetings.  Her part of the dance moves to the sidelines.  He’s the athlete, the scholar, the scout and she’s the cheerleader, encourager, and chauffeur.

The years pass and the dance continues.

The steps change.  Sometimes he takes the lead, sometimes she does.  There is more push and pull, give and take as the dance goes on.  The bigger the boy, the less he wants his dancing partner…the less he thinks he needs her.  She’s always close by, though.  Always ready to step in and right his course alongside him.

All of a sudden, though, their movements don’t go.  He is dancing too fast for her liking.  He thinks she doesn’t know the right steps.

On and off they go in this crazy tango of adolescence.  Around and around they dance.  Sometimes together, sometimes apart.  Sometimes in perfect sync, sometimes completely out of rhythm.

But as the song says, the beat goes on.

There’s a particular poignancy to the dance we dance with our teenage sons.

This dance with teenage sons is even more lively than when he was a toddler.  At times they dance together; at times they can’t seem to find the same beat.  She’ll reach out to him, but he evades her.  He needs to dance by himself for a while and she needs to let him learn his own steps.  So he dances on and she watches, waiting and ready, willing to join the dance again whenever he needs her.

At some point, she realizes it’s time for him to lead their dance now.  In fact, she realizes that without even knowing it, she’s been following his lead for a while now.

For years, she’s been responding to his changing emotions, changing moods, changing stature.  She’s watched as he’s taken his place in the spotlight and encouraged him as he’s branched out to learn new things.  His dance continues to gain momentum and movement as he gets steadier and steadier on his own two feet.  She sees.  And she knows now that he truly does need her to dance with him less and less.

And here it comes.  I see the tempo changing again.

I see it changing and I don’t know how it’s going to go.  Just when I feel I’ve learned the steps the music changes again.  Is the finale arriving?  I don’t think I’m ready.

Just when I’ve learned how to dance, it seems that it’s time for him to move on.

Like when he was a very little boy, I am confident in the dance I’m dancing with my oldest.  I know his steps and the meaning behind them.  But the tempo is changing.  The melody is speeding up and I know that before I’m ready, this dance with this boy in this house is going to end.  And I’ll have to open my arms and let him go.

And I cherish it.

I cherish every laugh and thank you and I love you.  I cherish every text my boys send to tell me they’ve arrived safely at a friend’s house and every time they say yes to helping someone, not because they particularly want to but because they know it’s the right thing to do.  Every instance they show me how they are growing more capable and independent.  I lay my head on their shoulders and kiss their cheeks unashamedly.  Somehow, though, those same cheeks that were smeared with baby food or dirt when they were little are stubbly with whiskers now.  And at the same time it makes me laugh, it breaks my heart just a little.

The same thing will happen with our next son, too, of course.  The same pattern of step in, step out, step together, step back, and release.  I know how blessed I am.

I know what an honor it is to be allowed to dance with my two sweet boys for so many years.  To watch them grow and lead them through their various ages and stages, learning their particular dance with them along the way.

So, let’s dance on, my boys.  And someday, when we get to that wedding reception and it’s our time to take the floor together again, I can promise you I’ll cherish that, too.

2 thoughts on “The Mother-Son Dance”