In the past, a call from my doctor saying that I needed further images after my initial mammogram would have sent me reeling.

However, when the call came a couple of weeks ago, I didn’t freak out.  Not really, anyway.  I never had that nagging, awful, heart-racing anxiety that would have plagued me just months before.  The scary thing had happened, but I wasn’t crying.  I wasn’t hiding in my room.  I wasn’t keeping it to myself and pretending it didn’t exist.

Suffice it to say that the news didn’t come during a dull time.  I had just turned 40 a couple of days before.  My sister flew into town that same day to surprise me.  My parents came to visit, the kids had a swim meet, and there were birthday festivities to attend to.  Soon after that, I made a quick trip clear across the country for a funeral.  There was simply so much else I was paying attention to that distraction was the name of the game.

When I called the Hill Breast Center here in Jacksonville, I was surprised to discover just how intense my next appointment would be.  First, I would have an in-depth, diagnostic mammogram.  A radiologist would read the results while I waited.  Built into my appointment would be time for an ultrasound and/or a needle biopsy if those proved necessary.  Naturally, I was sure they wouldn’t be needed.  There couldn’t be anything wrong with me!

While I waited for the fateful day to arrive, I told others about what was going on.  I asked for prayers.  No, I didn’t shout it from the rooftops, but I didn’t hide it, either.  I reached out to others I knew who had been in similar situations and asked for their expertise and advice.  It totally helped.

You know, I’ve heard people before claim how they could “feel the prayers of others” working in their lives.  As a woman of faith, I never doubted them, but I don’t think I’ve ever actually experienced it.   Looking back, though, over the last couple of weeks of waiting, I know for certain that the prayers of others was part of what made me so calm, so peaceful.

Add those prayers to the craziness of life in general (and maybe throw in a little naiveté), and I was good to go for the big day.

How it went down

OK, so before we go any further, let me clarify something.  In my previous mammogram post, I said that it didn’t hurt.  That it was uncomfortable and that was it.  Well, my friends, that was a screening mammogram.  They took about 8 images that day.  No big deal.  A diagnostic mammogram is a horse of a different color.  At least 20 images, super awkward ways of standing, machinery being shoved under my chin and in my armpit.  Fun times, for sure!  Not.  And it didn’t help that the calcifications they were looking for were in a rather difficult spot to scan.

I truly can’t say enough wonderful things about the ladies I saw that day, though.  They were so kind, so thorough, so willing to work hard to find what they needed to see.  When the mammogram was finished I was taken back out to the waiting area while the radiologist read the scans.

In short order, the tech came to get me and led me to a consultation room.  The radiologist wanted to talk to me.  My stomach dropped.

Thankfully, what she had to say was pretty reassuring.  While I needed a needle biopsy to check this certain cluster of calcifications, there was no tumor and nothing that looked cancerous to her eyes.  What she said next really made me feel like it was all going to be OK.  It went a little something like this, “I can’t tell you for certain that it’s not cancerous.  My inclination is it is totally benign, but we need to make sure.  Even if there are cancer cells, it is so small an area that we would be able to take it out no problem and you will be just fine.”

I could breathe again.

I won’t go into all of the details of a needle biopsy.  There’s lidocaine, a big ol’ needle, a crazy sort of sucking-sounding machine.  Given my history of passing out at blood, I didn’t watch.  Not that I could, as I was firmly squeezed into a mammogram machine at the time, but still.  About 10 minutes later, it was all done.

They sent me on my way, reassuring me that I would be called in about 48 hours with the results.

A bird in the sky and a lily in the field 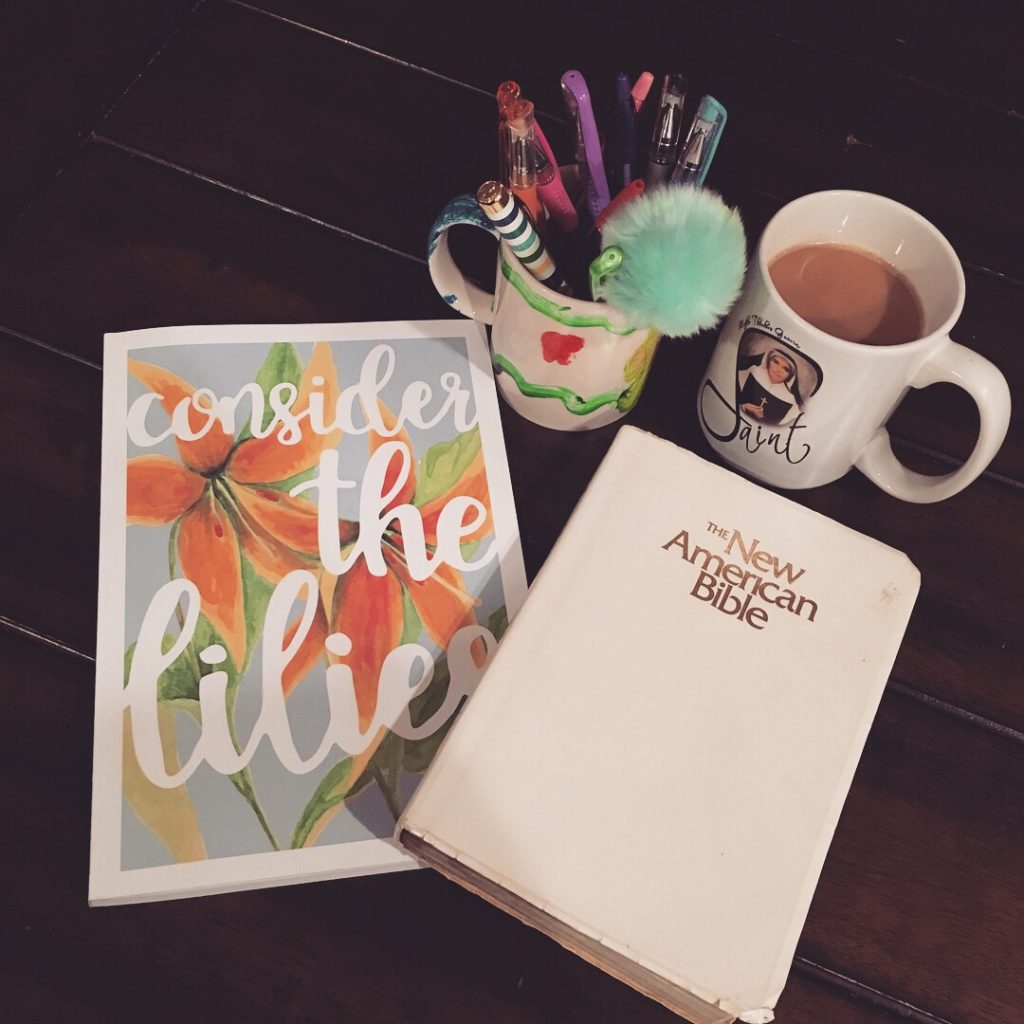 As Providence would have it, the day of my appointment, I started a new Bible study.  It’s called Consider the Lilies (affiliate link, right there) and is the work of some amazing Catholic women over at Take Up and Read.  It’s full of words of consolation and encouragement for the difficult times of life, but also fills your spiritual tank when life is treating you well.

The first three days of the study have been just what I needed.  Words that have been balm to my soul jumped off the pages at me.  Reminders of God’s grace and love spilled right into my heart.

Do not worry about anything, but in everything by prayer and supplication with thanksgiving let your requests be made known to God.  (Philippians 4:6)

Yet will I rejoice in the Lord and exult in my saving God. (Habakkuk 3:18)

All the days long I turned to these words.  And you know what?  I wouldn’t have turned to the Bible if it wasn’t for this study.  I’m just not a huge Bible reader.  (Hmmmm…maybe that’s going to change.  Don’t ya think?!)

Then, this morning, these beautiful words danced in front of my eyes.  And I honestly and truly felt that no matter what the doctor would say when she called, it was all going to be just fine.  God was in control.  Not me.  I needed to be like the birds in the air and the lilies in the field.  They don’t worry or work and the Lord takes care of them.  He would do the same for me.

These words sustained me, supported me, and were in my mind when I answered the phone this morning.  When the voice on the other end of the line gave me one of the best gifts I’ve ever received.

Everything is benign.  No atypical cells at all.  See you in six months.

And what were those words, you ask?  Here you go… 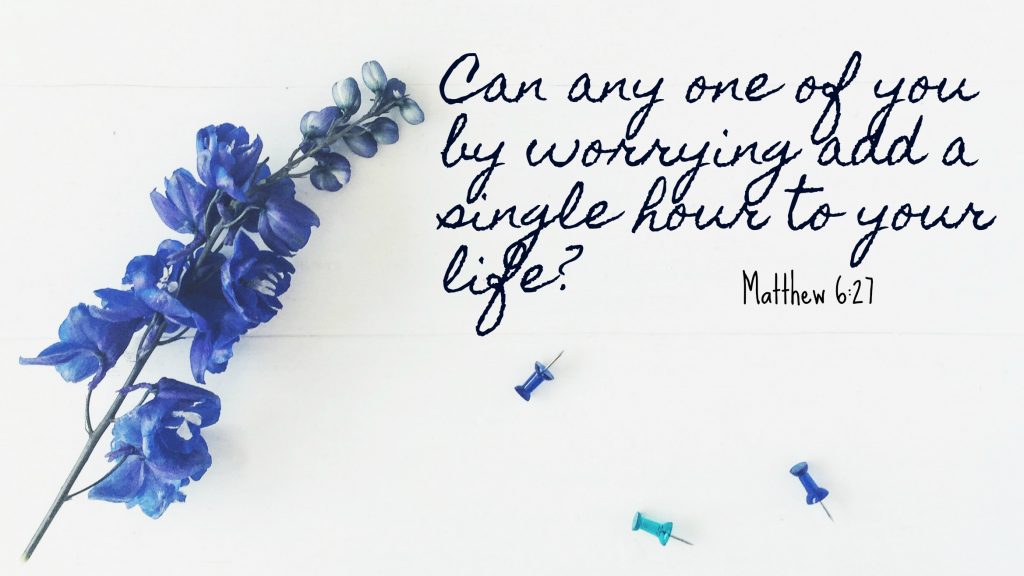 No.  I won’t worry.  My life is going to be what God will grant me and He will take care of me through whatever may come.  I trust that.  And I hope with all hope that you, my friends, know it, too.  I pray that you do.  With all my heart.

faithmammogramprayer
Of Bandaids and Boo-boos
Is Summer Vacation Over YET?!

3 thoughts on “Worry and Peace”