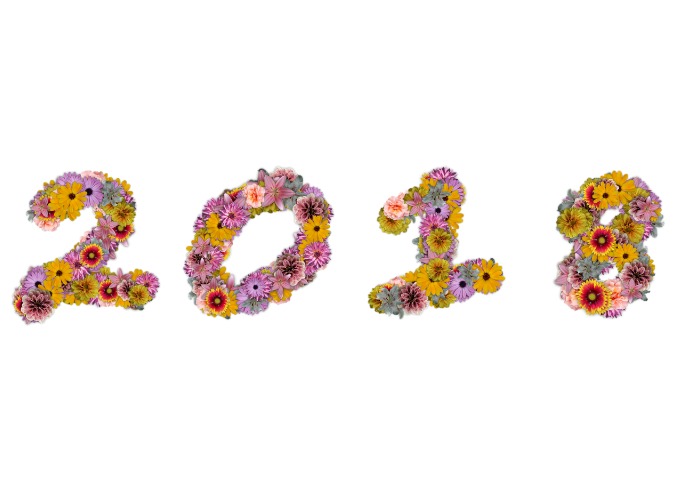 In an effort to not end the year in a total buzzkill of a hormonal funk (see previous post), I’ve decided that my last blog post for 2018 should be nothing but good stuff.  It’s time to shake off the grinchy green and feel a little better about things, ya know?

I thought that maybe, by going through our year photographically, my spirits would be lifted.  And boy, was I right!  I spent a good hour combing through jpeg files on ye olde laptop and making all of these collages you’ll see.  Sure enough, as the minutes ticked by, I felt my mood lighten and the corners of my mouth turn north instead of south.

This year has been really fantastic, overall.  There’s been hard work, achievement, and true quality time with my family.  We have traveled, explored, and tried new things.  There’ve been birthdays and anniversaries to celebrate and remembrances made.  It’s been busy and crazy and stressful and fun all rolled up together.  So, basically, normal life…yes?

Here, friends, I give you our family’s year in review…the good parts version. 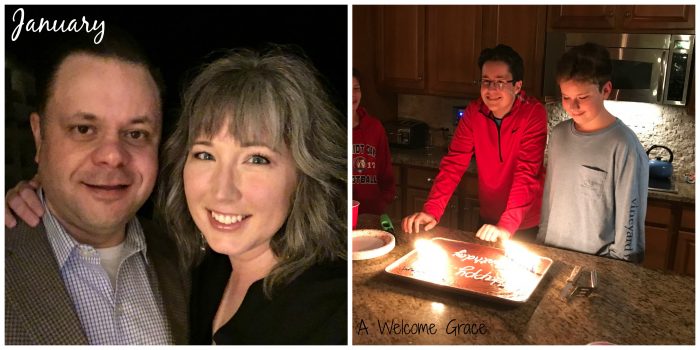 January started the year off quite well.  Greg and I had a weekend getaway to Amelia Island.  Traveling together is always something we love to do.  Also this month, we gained our second teenager!  Our boys turned 16 and 13 within a week of each other.  Son #1 passed me up height-wise a while ago, but as of his birthday, I was still taller than Son #2.  Let’s just say it didn’t take long for that to change. 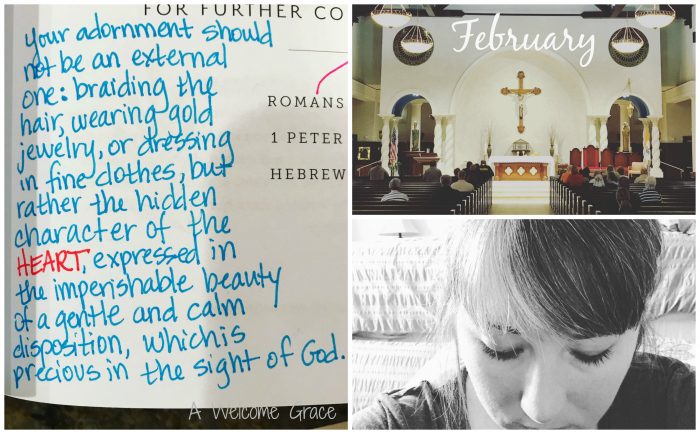 February is usually a pretty low-key month for us.  Winter sports are over, swim team hasn’t started yet.  And this year, Lent started on Valentine’s Day, so the whole month took on a bit of a more somber feel.  As part of my Lenten preparations, I did some extra Bible study, attended daily Mass a few times, and did a little more introspection. 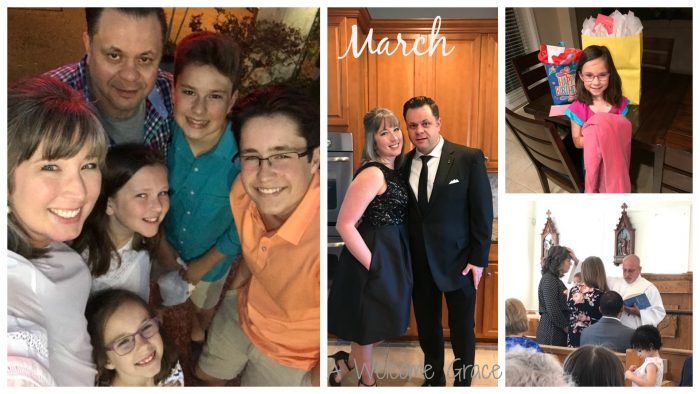 March was all about celebrating family.  We had our yearly family photo taken and I had a headshot taken for the blog.  (See that one over on the right?  Yep.  That’s the one.)  Greg and I went with another couple to the Catholic Charities Black & White Ball.  It was fun to get all fancied up for a night.  I also became a godmother again as sweet Maria Louise made godchild number 6.  And our lovely littlest bit turned 7 whole years old. 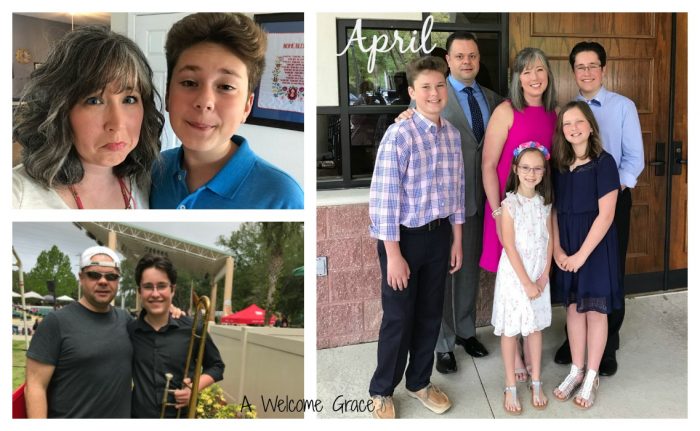 Even though Easter happened on April Fool’s Day this year, there was no foolin’ about it.  Jesus rose from the dead, Amen & Hallelujah!  In other, more worldly news…  Our oldest son had a solo at a jazz festival he played at with his school jazz band.  Greg and I had a great time on a day date to watch him.  And remember when I said it wouldn’t take long for Son #2 to outgrow me?  Well, April is when it finally happened.  I am officially the 4th tallest member of our six-person family. 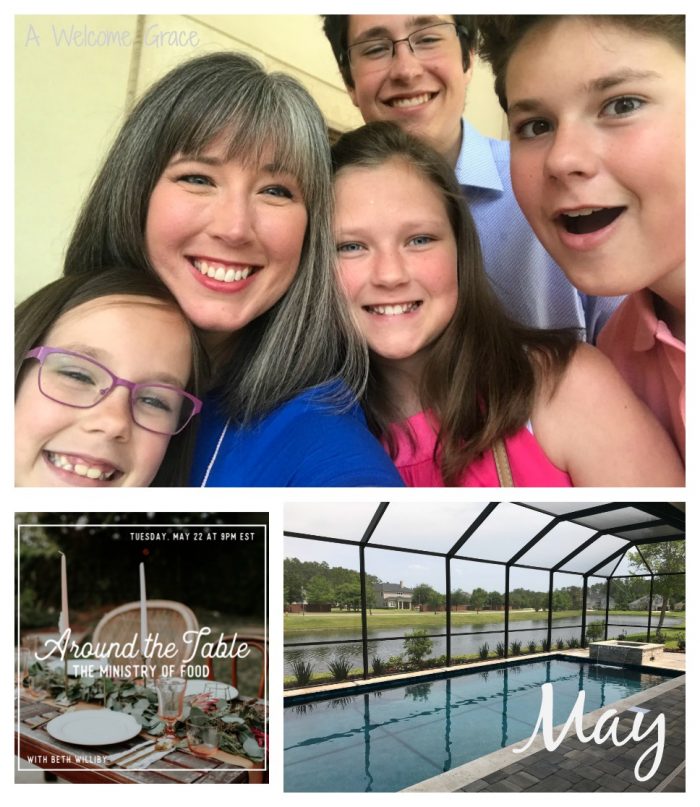 In May, we celebrated both Mother’s Day and Greg’s birthday.  Unfortunately, he was out of the country when both of those things happened.  He’s a pretty great guy, though, and is teaching our children well in the ways of gift-giving and making someone feel special.  Our kids did a great job of taking care of me on my special day.  We also finished building our pool!  It was quite the big deal and we were (and still are) so grateful to have done it.  Lastly, I managed to host my very first workshop for Blessed is She.  I was so honored to talk about how I believe food and the care & feeding of humans can be a path of ministry. 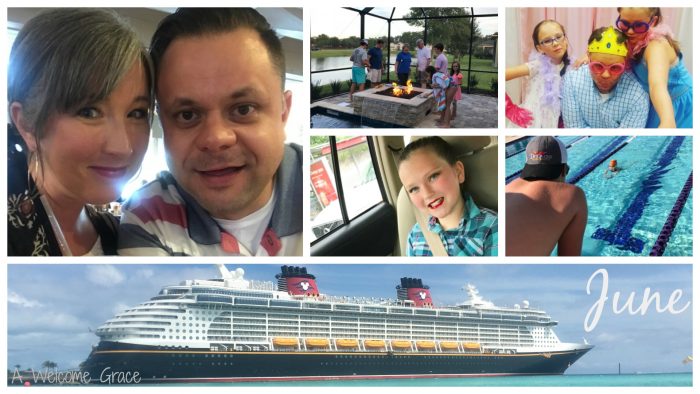 June always seems to be one of the busiest months of the year.  But it’s always so much fun, too!  Maybe it has to do with the fact that my birthday, our wedding anniversary, and Father’s Day are all within a few days of each other.  Or that we spend a lot of time at the pool with our neighborhood swim team friends.  But this year, we also added in a Daddy-Daughter Dance, a dance recital for Daughter #1, a visit from my parents, AND a week long Disney cruise!  (This was also the month that we became parents to a licensed driver, but we aren’t going to talk about that.)

Tell ya what, you figure out a way to time travel back to June 2018 and I’m all over it, baby! 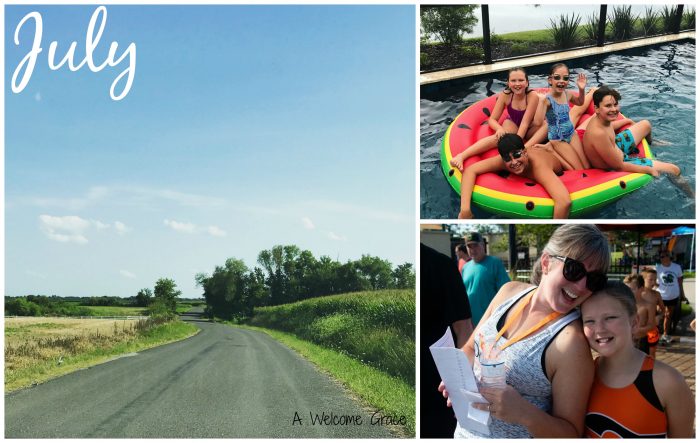 Oh, July…you long, hot beast of a month, you!  Summer swim team wrapped up in the middle of the month.  Lots of ribbons were earned, times were dropped, and two of the kids had awesome achievements.  Son #1 was named Junior Coach of the Year and Daughter #2 was the most improved girl swimmer in her age bracket.  The kids spent lots of time in and around the pool (which meant I spent lots of time washing and drying towels).  And we ended the month with a trip back up to my hometown for my dad’s family reunion. 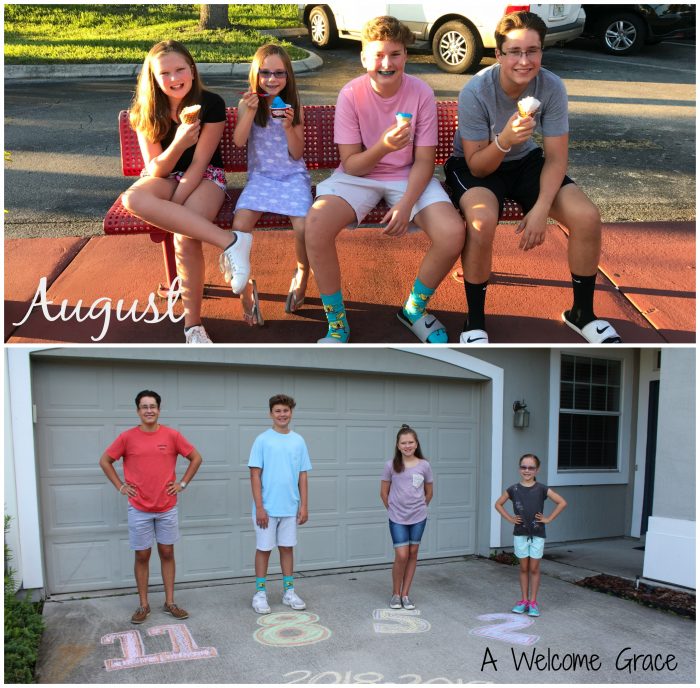 August always passes by in such a whirlwind of activity.  We came back from our vacation up north just in time for the start of the school year.  We have an annual tradition of going out for ice cream as the official End of Summer celebration.  The kids have sat on that exact same bench for this exact same picture for about 4 years now.  It’s pretty awesome. 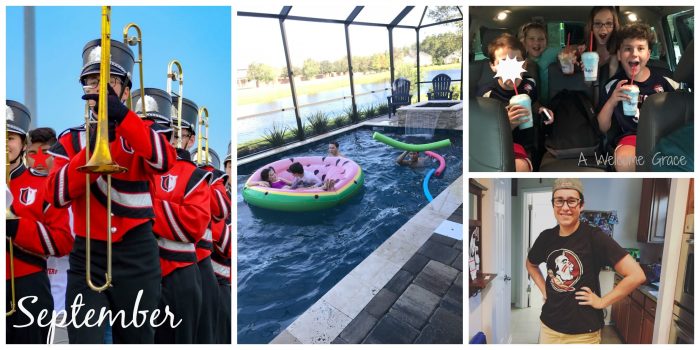 What does September look like?  Well, picture a lot of marching band, with some volleyball thrown in, alongside family cookouts by the pool, and some schoolwork.  Throw in our oldest’s very first trip to the school of his dreams to see if it’s really where he wants to go (short answer: yes) and that’s one crazy month! 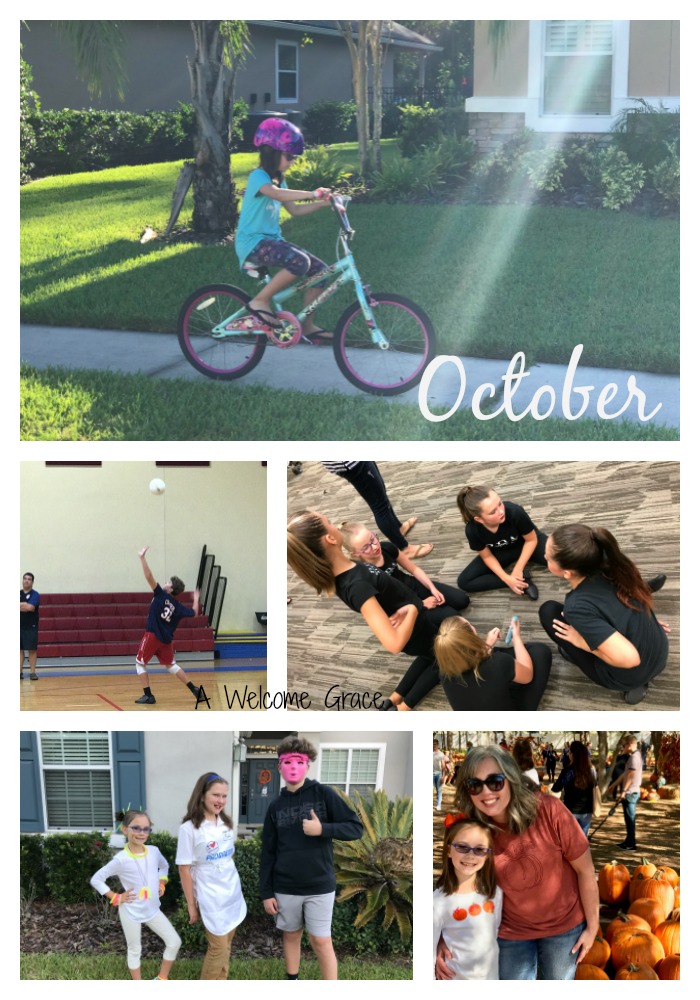 Holy Busyness, Batman!  Maybe it would be easier to tell you what we didn’t do in October.  Let’s see…eat well, exercise much, sleep a whole lot.  Now, what did we do?  Well, the little one taught herself how to ride a two-wheeler.  There were more volleyball games.  Our older daughter is on the dance team this year, so that meant performances at two different fall festivals.  And, oh yeah, Halloween. 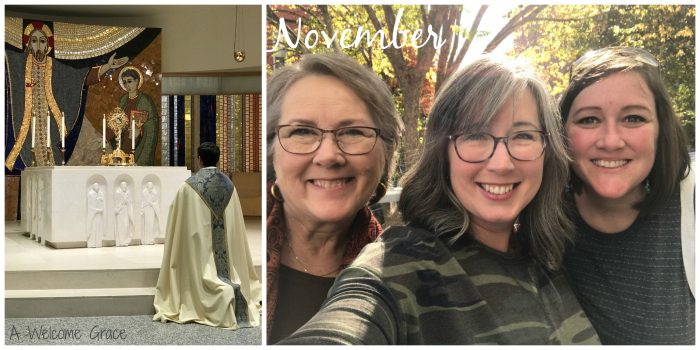 November was pretty freaking amazing.  Not only did I get to have a long weekend in Washington, DC with my mom and my sister, but the three of us also attended the Blessed is She Wild Retreat together.  There just aren’t words, friends.  In addition to that, we had a wonderful time up in Tennessee with my side of the family for Thanksgiving!  Honestly, we couldn’t have asked for more. 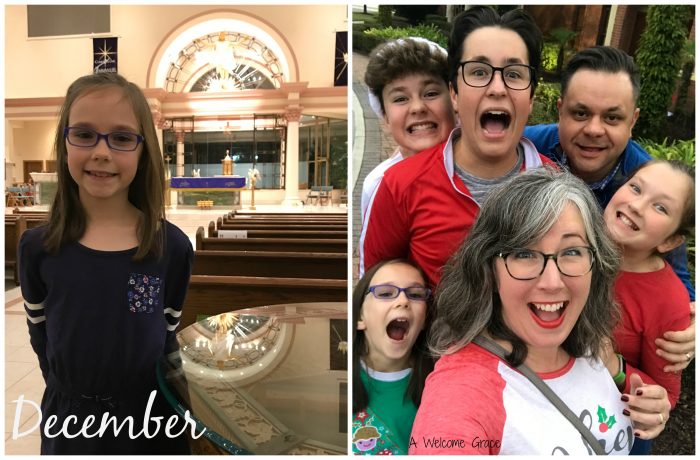 Truly, this has been quite the month.  We’ve had highs and we’ve had lows.  Christmas came with all of the usual blessed insanity.  But we also celebrated our youngest child’s First Reconciliation!  My favorite day of the whole month, though, was the day we took the picture on the right.  In one day, we went from a flag football game to Tuba Christmas downtown to visiting Santa at our neighborhood clubhouse and then rounding out the day with time at the Night of Lights in St. Augustine with Greg’s side of the family.  This is the second year in a row we’ve had a day like that and, well, it’s pretty much my favorite.

Well, I have to admit that I really do feel better now.  I mean, how could I not when I’ve spent the better part of three hours staring at these beautiful faces and reliving all the best parts of our year?

2018, you were pretty alright.  Thanks for the memories!!  Now, tell your friend 2019 to go easy on us, OK?  And it can really take its time passing through.  We’ve got growing kids and I’d like to have them around here for as long as possible.

faithfamilygrowing kidskidsparentingtraditions
The Mantra that Saved My Christmas
Something’s Coming