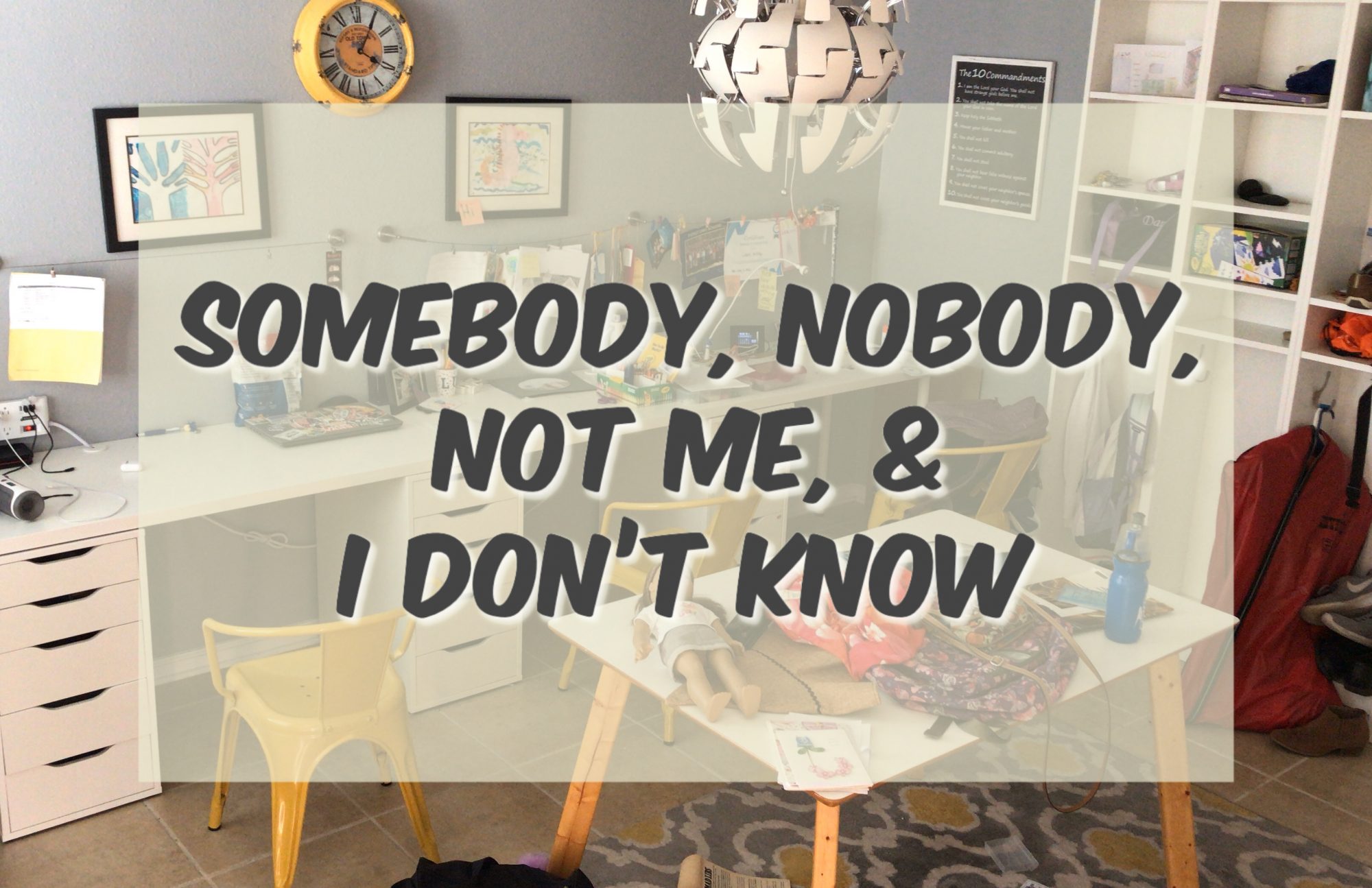 The longer that I am a parent, the more I am convinced that there are people – children specifically – who live in my house that I’ve never even met before.

No, it’s not because of the endless supply of laundry that seems to come out of nowhere.  No, it’s not the copious amounts of cups and water bottles that wind up on the counter, more than any family of six should rightly be allowed to own much less use.

See, the reason I think – no, I know! – we have these extra people is because my children actually refer them on a daily basis!  They blame them for things that have happened and credit them with chores that have yet to be accomplished.  These poor extra people always seem to get thrown under the metaphorical bus and never have the opportunity to defend themselves.  And honestly, I feel it serves them right.

So, who are these extra people who live here?  Well, I’ll tell you.  Maybe you know them, too.

Their names are Not Me, I Don’t Know, Somebody and Nobody.

Poor Not Me is the biggest scapegoat I have ever known.  My children blame him/her for everything!

“Who left these socks on the family room floor?” Not Me!

“Who didn’t take out the recycling last night?” Not Me!

“This bathroom is disgusting!  Whose turn was it to clean the sinks?” Not Me!

You get the picture?

For everything from the minor sock infraction (which, let’s be honest, Mom always knows the answer to whose socks are whose) to the larger issue of chore responsibility, Not Me is a straight up troublemaker.  He’s also quite a bad influence on children who don’t like to take responsibility for their actions.

Like I’ve told my kids a million times, if I ever find that Not Me, he is going to be in some serious trouble!  Frankly, he can leave my house any time he’d like.

“Guys.  There is something sticky on the couch.  How did it get here?”  I Don’t Know.

“Who ate all of the grapes?  I swear I just bought the 4-lb box from Costco yesterday!” I Don’t Know.

“Didn’t I just ask for someone to put new toilet paper in the guest bath?  Where did it go?”  I Don’t Know.

Yep.  Another troublemaker.  However, unlike her good friend Not Me, I Don’t Know isn’t big on the blame game or avoiding responsibility.  I Don’t Know is like that dumb friend we all had in high school, that one who just couldn’t help doing dumb things.  The one that our mothers swore would make us stupider if we hung around them too much.  You know, don’t you?

I Don’t Know is often forgetful and rather flighty, but doesn’t generally set out to be bad.  Poor thing just isn’t very bright, that’s all.

Hmmmm… I wonder what that says about my kids?!

Somebody – and her sad, sorry cousin Nobody

OK, to be perfectly fair, I call upon Somebody more than the kids do.  In my feeble attempt to help them gain some responsibility, I try to leave certain quick and easy chores up to fate.  For example:

“Can Somebody please come put these towels away?”

“Somebody needs to go get the mail.”

“Gosh, I’d really like it if Somebody could take out the trash.”

Unfortunately, more often than not, Somebody’s sad, sorry, no good cousin Nobody shows up to do the job instead.  Or, rather, to not do the job, as the case may be.

Of course, when I was a kid, my own nickname was Somebody.  I guess it was my own fault, though.  See, whenever Mom would say something like I just mentioned above, I’d look around at my siblings (who were obviously much more cunning than I was) just waiting for one of them to jump up to do it.  But would they?  Nope.  They’d all just sit there!  Not moving!  Doing nothing.

“Fine!” I’d say.  “Since Nobody else is going to do it I guess Somebody will!”  Somebody, in this instance, being me.

And so everyone was happy!  Well, almost.  Mom was happy the job got done.  My siblings were happy they didn’t have to do it.  And me?  Well, let just say Somebody wasn’t happy she had to do everything all the time, even though it was her own dang fault.

In Summary, a story…

Now that I’ve introduced you to the extra people who live at my house, why don’t you just sit back for a moment and take a load off.  Let me tell you a story, friends.  And we’ll see if it sounds familiar.

“Well, will Somebody call it so that it’ll ring and I can find it?”

“Mom’s phoooooooooone!” come the sarcastic cries from all over the house.

“Ugh.  Fine.  Since Nobody will call it and I Don’t Know where it is, I guess I’ll just call it myself.”

Narrator: Mom, in a fit of rage, dials her own cell phone number only to suddenly have her back pocket start ringing and vibrating. 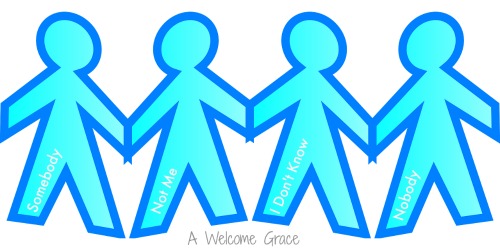 big kidsfamilygrowing kidsmom lifeparentingteens
October Reads – This is what happens when I try to cut down on screen time.
Talking Turkey: The Ultimate Guide to Thanksgiving Sides